The ACLU of Maryland is a non-partisan organization that exists to empower Marylanders to exercise their rights so that the law values and uplifts their humanity. In the Maryland General Assembly, we advocate for a broad range of rights – including access to justice, legal justice reform, election fairness and voting rights, freedom of expression, government transparency, police accountability, rights of people who are incarcerated, public school students' right to education, equal protection, privacy, racial justice, due process, religious liberty, and LGBTQ+ and reproductive rights.

During the 2022 legislative session, the ACLU expects to dedicate significant time and resources to these pressing priorities listed below. 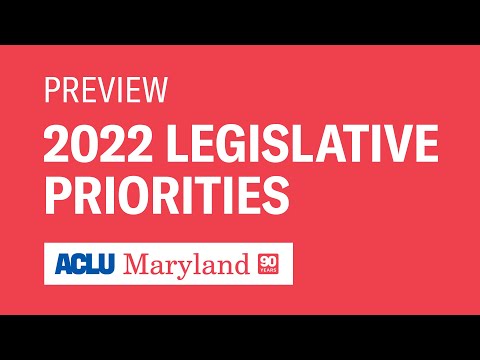 Get THE 2022 prioritieS FACT SHEET

It is time to legalize marijuana and establish reparations for communities targeted by the biased, failed war on marijuana. For decades, the criminalization of marijuana has been a pretext for criminalizing and over-policing Black, Indigenous, and People of Color. Despite Maryland’s decriminalizing of possession of less than 10 grams of marijuana in 2014 – and despite comparable rates of use among Black and white people – Black Marylanders continue to be arrested overwhelmingly more than white people, and at rates disproportionate to their percentage of the population in almost every county. During the 2022 legislative session, the ACLU will support a bill to 1) legalize adult recreational use of marijuana; 2) allocate 60% of the tax revenue from marijuana sales directly to Maryland communities directly impacted by the war on drugs; 3) prohibit the odor of marijuana alone from being used as probable cause to search a person or their vehicle; 4) vacate previous marijuana-related convictions; and 5) mandate opportunities for reconsideration and vacatur for those currently serving sentences for marijuana-related convictions, and other low-level felony and misdemeanor convictions relying on evidence obtained based on the odor of marijuana.

Get the Marijuana Legalization Timeline

The Baltimore City Civilian Review Board was first established by the Maryland General Assembly in 1999 with the authority to receive and investigate certain police misconduct complaints. During the 2021 legislative session, the General Assembly passed the Maryland Police Accountability Act of 2021, which requires each jurisdiction in Maryland to establish a Police Accountability Board, tasked with reviewing complaints from the public and appointing members to the Administrative Charging Committee and Trials boards, among other responsibilities. Due to the conflicting statutes and similar functions of both entities, during the 2022 legislative session, the ACLU will support legislation to allow the Baltimore Civilian Review Board to absorb the responsibilities and duties assigned to the Police Accountability Boards.

Every Maryland school district utilizes School Resource Officers (SROs), in spite of overwhelming evidence that police presence in schools substantially increases the likelihood that students will face arrest for behaviors that are better addressed through non-punitive support and interventions. That risk of arrest is far higher for Black students and students with disabilities who are disciplined and arrested for frequently minor offenses. The 2022 Counselors Not Cops legislation would work towards removing police from schools by reinvesting state dollars from SRO’s into student mental health and behavioral services, wraparound supports for students, and restorative approaches that work.

Every day in Maryland, children entangled in the legal justice system are questioned without a parent, guardian, or attorney present. As a result, they face criminal charges, prosecution, and incarceration without the basic due process rights that adults are entitled to. This important legislation will require a child to consult with an attorney, private or public defender, before they are interrogated by law enforcement. This matters because children are unable to fully understand the gravity of situations, because they lack the social and emotional maturity of adults. They are far more likely to admit guilt, even when they are innocent. This bill will put the proper mechanisms in place, so that when police must interrogate a child, the child has consulted with an attorney and their parents or guardians are notified.

The ACLU of Maryland will advocate with partners for adequate and equitable funding for public education, for comprehensive and disaggregated data for school suspensions and discipline, and for safe, healthy, modern school buildings. The ACLU will continue working in coalition to fully fund the Blueprint for Maryland’s Future (aka “Kirwan”) and to ensure that the new dollars planned for this coming school year can be used to address the most pressing needs of students, especially for Black, Indigenous, and Students of Color, those from families with low income, and those with special education needs. The ACLU will support HB 171 to require the Maryland State Department of Education to publish reports on discipline-related data – disaggregated for race, ethnicity, gender, disability status, socioeconomic status, and English language proficiency – for every school in the state. And the ACLU will work to maintain support for funding to address school facility deficiencies, and to ensure that districts with the lowest wealth are prioritized.