Because Black Lives Matter, the ACLU of Maryland works to end racism and oppression against Black people.

Access to justice and opportunity in America is too often defined by skin color. Historically and currently, Black people have been forced to navigate a world that is structured to dehumanize and criminalize them. Black people and their communities face disinvestment, disregard, and demonization that are rooted in white supremacy. Yet for centuries, Black people have persisted in their struggle for liberation. The ACLU of Maryland knows that Black people deserve to always have their whole selves and voices considered and valued in the laws, policies, and practices of our institutions, particularly in our government.

The dangerous and persistent problem of police violence against Black people has its roots in paying white people to catch Black people who were enslaved. The people who are killed by police are disproportionately Black – across the nation and in the state of Maryland. As nationwide protests continue in the wake of police officers murdering George Floyd, Breonna Taylor, and Tony McDade, we remember victims of police killings in Maryland, too, and support communities advocating for reform in their names: Emanuel Oates, Anton Black, Leonard Shand, Korryn Gaines, Manuel Espina, William Green, Tyrone West, Christopher Brown, Gary Hopkins Jr., Robert White, Freddie Gray, and too many more.

Voter suppression is the denial of political power and another key way that white supremacy has undermined Black lives. Most voter disenfranchisement laws for people who are incarcerated came into existence in response to the end of slavery and the beginning of mass incarceration. Today, too many elected leaders and government officials believe it is the right thing to stop individual citizens, especially people who are incarcerated, from voting. Maryland has one of the worst racial disparities of people who are incarcerated in the country. Despite comprising only 30 percent of the state’s population, Black people make up 70 percent of the population in prisons and jails. The racialized impact of policing and incarceration, combined with blocking the fundamental right to vote, has created an unacceptable reality of Black people denied the opportunity to shape the laws, policies, and practices that effect their lives.

We know that the ACLU of Maryland operates within and is often privileged by white supremacy. For many decades, the ACLU of Maryland has been committed to challenging violence against Black Marylanders – in the form of historic and still lingering institutional racism in policing, incarceration, education, housing, free speech and voting rights. In recent years, the ACLU of Maryland has renewed that commitment to work with a race equity lens, internally and externally. We work with and are led by communities and advocacy partners to ensure the promises of freedom, justice, and opportunity enshrined in our Constitution and civil rights laws are fully realized for all people.

We look and work forward to the day our Constitution, laws, and principles equitably protect Black communities. 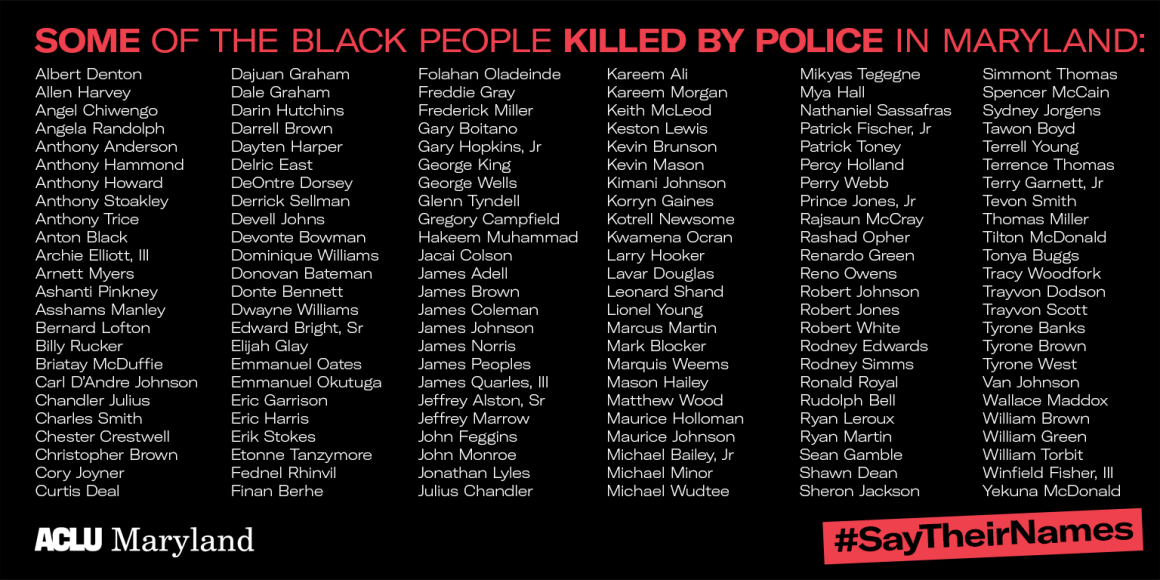 The ACLU of Maryland stands in support of the Movement for Black Lives. We stand against efforts to discredit, demonize and destroy this movement in the way that the government and others have tried to undermine Black political power in the past.

Learn more about the Movement for Black Lives

Demanding Accountability from the Police and Courts

New Thinking Freely Podcast Episode - “Know Your Rights: What to do...

One Year After the Police Killed Emanuel Oates: What Still Needs to...

One Year After the Uprising for Freddie Gray and for Police...