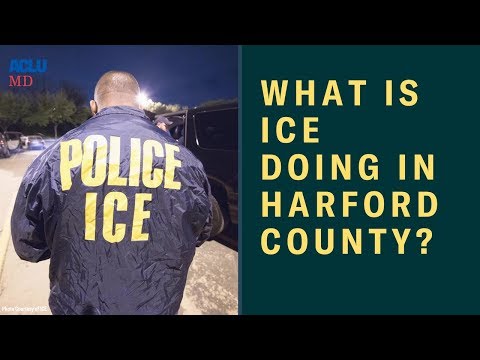 287(g) is a federal-local partnership that authorizes a local law enforcement agency to perform duties of the federal Immigration and Custom’s Enforcement (“ICE”), an agency within the U.S. Department of Homeland Security (“DHS”). Local police receive little training and often racially profile Black, Indigenous, and People of Color residents, presuming that they have an immigration problem. 287(g) refers to the section of our immigration laws that authorize this partnership.

Currently, DHS only negotiates “jail agreements,” which allow local police to act like federal immigration agents within local jails. This results in local police questioning individuals in these jails about their immigration status, preparing documents to charge them for immigration violations, and ordering the continued detention of persons thought to be subject to deportation. However, too often  in practice local police illegally act as ICE agents outside of jails, too.

The sheriffs in these three counties claim that the program is for public safety, but that is a myth. This program not only instills fear within immigrant communities, but it alienates and racially discriminates them. The people arrested and processed through the 287(g) program are overwhelmingly nonviolent, and are pretextually arrested for traffic offenses so they can be questioned about their immigration status at the jail, have immigration proceedings initiated against them, and then deported.

Make no mistake, people processed through the 287(g) program are overwhelmingly Black, Brown, and People of Color.

In Frederick County, more than 80 percent of the 287(g) arrests were for low-level offenses and 60 percent were for traffic offenses.

A 2018 study of Mexican immigrants who were undocumented showed that:

ARE THEY EVEN TRAINED?

Local police officers are wholly unprepared to act as immigration agents in local jails. Officers must learn about how to enforce complex federal immigration law in just a four-week Immigration Authority Delegation Program, while Deportation Officers have to go through a 12-16 week Immigration Law Enforcement Training Program, in order to learn how to enforce those laws. The inadequacy of the training involved in 287(g) program leads to civil rights violations such as racial profiling, false arrests, and more. It can also lead to significant harassment by local police of the immigrant community.

HOW ARE THEY FUNDED?

ICE covers the cost of training deputized officers, but state and local governments have to pay the majority of costs associated with a 287(g) program, including travel, housing, and per diem for officers during training; salaries; overtime; other personnel costs; and administrative supplies.

However, there are some programs and grants that local law enforcement participates in, to help pay for the 287(g) program. Intergovernmental Service Agreements (“IGSA”) is another partnership with the federal government where the locality’s detention center rents beds to ICE to detain immigrants. Frederick, Howard and Worcester counties have IGSAs to help ICE cage immigrants who are detained in Maryland. With these IGSA agreements, the counties are profiting off of the pain and separation of immigrant families.

Some law enforcement agencies also receive funding through the State Criminal Alien Assistance Program (“SCAAP”), which gives them federal funding to reimburse any expenses spent on incarcerating immigrants with serious criminal convictions in their jail.

The ACLU of Maryland strongly opposes the 287(g) program. It leads to illegal racial profiling and civil rights abuses.

Frederick County was the first to introduce this racist program to Maryland back in 2008 under the Obama administration. In the 12 years since, over 1500 Frederick residents have been processed for deportation, the majority identified while processed for non-violent offenses and traffic violations. As a result, thousands of families have been negatively impacted in Maryland while Frederick residents have had to confront the impact of racial profiling and intentional stigmatizing of immigrant residents, particularly Latinx people.

Thankfully, Frederick residents, both immigrants and allies, have made sure their elected officials are aware of these consequences through a steadily growing immigrant rights movement. Local immigrant leaders began to speak out against the program at annual 287(g) steering committee meetings, and in 2018 formed the RISE (Resources for Immigrant Support and Empowerment) Coalition of Western Maryland to organize the immigrant voices and power and protect the rights of all immigrants who live in Frederick County and more broadly across Western Maryland.

The RISE Coalition was also instrumental in the successful Medrano v. Frederick Sheriff Jenkins lawsuit, which settled at the end of January 2021 in a victory for immigrants across the state. Ms. Medrano is a Latina resident of Frederick, who was unlawfully racially profiled by Frederick Sheriff’s deputies and was almost taken away from her family. Joined together with the RISE Coalition, she sued the Sheriff’s office and reached a settlement that involved $25,000 in damages, an apology from Sheriff Chuck Jenkins himself, and a series of measures to address the broader pattern and practice of racial profiling, including training, reports on biased incidents, and a guaranteed commitment to continue the 287(g) Steering Committee meetings that were discontinued in 2020.

Since 2016, the Harford County Sheriff’s Office entered into a 287(g) agreement with ICE.

On November 28, 2017, the Harford County Sheriff issued a press release summarizing its annual results of the 287(g) program, naming certain stats that didn’t explain the entire picture. That is why the ACLU of Maryland sent a Freedom of Information Act (FOIA) request to get more information about the individuals they targeted through the program.

ICE is resistant to sharing information about the individuals they have been targeting through the 287(g) program. But local police officers and departments must be held accountable to the local communities they serve. If 287(g) agreements between local police agencies and ICE mean residents are blocked from information about how their police force is operating, that’s a big problem that thwarts government accountability and furthers racial discrimination.

On September 16, 2019, the lawsuit reached a settlement where the ACLU was given information about the Sheriff’s policies, directives, and information on individuals screened for ICE. What the data revealed was concerning. There was an overinflated number of people processed through the 287(g) program by about 33 percent. Accountability is one of our priorities in regards to these programs, and there must be a way to find these elected Sheriffs and ICE responsible for the actions they take and the accuracy of their data.

Cecil County is the third and most recent county currently signed to a 287(g) agreement, beginning in October of 2019.

Within months of the agreement being public, Cecil residents began to share their opposition to the program, including through unanimous direct testimony in opposition at the county’s first 287(g) Steering Committee. Residents, including members of the immigrant community, lobbied their state elected officials to pass the Trust Act and to ban local partnerships with ICE. The local activist group, Cecil Solidarity, has also begun to distribute bilingual Know Your Rights materials and is starting to compile data on the program’s implementation. By the Sheriff’s Offices’ own acknowledgment, of the 21 cases where Cecil County officials worked with ICE for deportation transfer in the first year of the program, 10 were for traffic violations, such as driving with a suspended license, which is itself a product of anti-immigrant policies that make it difficult for immigrants to obtain valid licenses.

Thanks to the work of residents who organized and to CASA, Anne Arundel County Executive Steuart Pittman ended the county's 287(g) program.

The ACLU published research report in April 2022, "License to Abuse: How ICE’s 287(g) Program Empowers Racist Sheriffs and Civil Rights Violations," that examines the records of sheriff offices and other law enforcement agencies that participate in Immigration and Customs Enforcement's (ICE) 287(g) program. This comprehensive review revealed that racial profiling, poor jail conditions and other civil rights violations are widespread among the 142 state and local law enforcement agencies ICE describes as participants in the 287(g) program as of April 2022. With strong recommendations for federal, state and local governments, this report investigates the unjust impacts of the 287(g) program and ways for the government to remedy the harm.

ACLU speaks out after Audit Design Team announces that 100 in...