Free the Vote: Let People Who Are Incarcerated Access the Ballot

Voting is a right that should never be taken away.

Denying the right to vote of people who are incarcerated is rooted in a deeply racist system. Dating back to the racist Jim Crow era, felony disenfranchisement laws were used in the states after the Civil War as an intentional effort to weaken the political power of Black people who had until then been enslaved. That time was also when the abominable effort began to incarcerate Black people who were newly freed. Today, 1 out of 16 Black people are disenfranchised from voting, and an estimated 5.17 million people in the U.S can’t vote because of a felony conviction.

Voting is one of the most valuable ways to demonstrate what our beliefs are or what our opinion is in this country. That’s why we are working towards a future where every Maryland citizen can vote regardless of their incarceration status.

Let’s imagine America in a different light. Let's create a place where the right to vote is restored for every citizen.

Add your name: "I support restoring voting rights to people who are currently incarcerated."

The past and present of restoring voting rights in Maryland.

Free the Vote is a documentary that depicts just how unjust and racist it is to deny the right to vote to millions of people who are incarcerated. Impacted people who were formerly incarcerated, scholars, politicians and advocates come together to discuss their experiences and the importance of your voice being heard.

The Free the Vote documentary was produced by the ACLU of Maryland. The purpose of this film is to uplift a movement to make sure every person regardless of their connection to the legal justice system can vote in the State of Maryland. 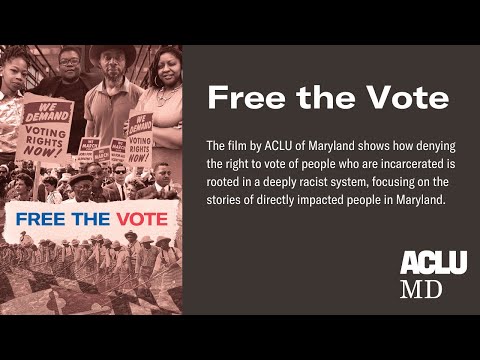 Let's imagine America in a different light. Let's create a place where the right to vote is restored for every citizen. Please complete the form if you would like to organize a digital screening of the movie. It is free to host a digital screening.

Free the Vote Documentary Blog Series Part 1: History up until the 1900s
READ

(All five Free the Vote blogs are available in one place in English and Spanish.)

Free the Vote: Let People Who Are Incarcerated Access the Ballot