In the federal court challenge to an illegal redistricting plan, brought by Black voters in Baltimore County and several civil rights organizations, Federal Judge Lydia Kay Griggsby granted a preliminary injunction blocking implementation of the County’s plan and ordering them to submit a new plan that complies with the Voting Rights Act by March 8.

ENFRANCHISING MARYLAND DURING AN ERA OF DISENFRANCHISEMENT

Our democracy is threatened without real access to voting for all. The ACLU of Maryland has long worked to stop voter disenfranchisement through state-wide initiatives like our Election Protection program. While tactics of ballot exclusion have evolved over the years, the path to overcoming this ailment and expanding fundamental suffrage is no modern idea.

Despite outspoken community concerns, in late December 2021, the Baltimore County Council passed, by unanimous vote, an unfair and racially discriminatory election plan. The Council plan clearly violates the Voting Rights Act, the landmark law meant to protect the voices and concerns of BIPOC voters that have too often, for too long, and in too many places, been excluded from meaningful representation.

Baltimore County is one of those places where strong Voting Rights Act enforcement is needed most, given the County’s disgraceful history of locking Black and Brown people out of representative government. This is true now more than ever, given the perilous moment our democracy faces today.

That’s why our partners -- Baltimore County NAACP, League of Women Voters of Baltimore County, Common Cause Maryland, and several individual Black voters – are challenging the County’s discriminatory plan in federal court, in the long tradition of voting rights activists across the decades since passage of the VRA. Learn more about the Baltimore County Coalition for Fair Maps here.

Consider this: BIPOC residents make up 47 percent of Baltimore County’s population, an increase from 25 percent in 2000 and 35 percent in 2010. But despite this growth, the Council’s redistricting plan will create a gerrymander that keeps six majority-white districts among the seven Council districts.

By packing an excessively large number of Black voters into a single majority-Black district, the County plan dilutes their influence and halves the political power and opportunities of Black voters throughout Baltimore County. 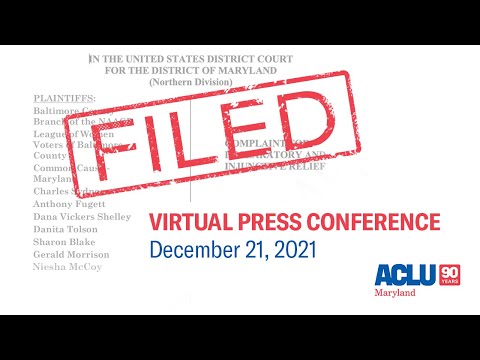 Enfranchising Maryland During an Era of Disenfranchisement