The American Civil Liberties Union (ACLU) of Maryland filed a lawsuit challenging the practice as an unconstitutional violation of free speech and illegal under Maryland's public transparency through "gag orders" that silence victims of police abuse as a condition of resolving their cases.

In 2012, Ashley Overbey, then a 25-year-old Black woman, called the Baltimore City Police Department (BPD) for help, reporting a burglary at her apartment. Three sets of police officers were dispatched to her apartment at various times. The crime lab unit radioed for police officers to return and one of them, Officer Fred Hannah, forcefully entered and began searching her apartment without her permission. When Ms. Overbey asked him to explain he became violent and aggressive. Another officer, Martin Richardson, came soon after and together they beat, tackled, choked, Tased and handcuffed Ms. Overbey, who was transported to the hospital, then jailed for 24 hours, and charged with six counts of assault and one count of resisting arrest.

All charges against Ms. Overbey were dropped and she successfully sued the Baltimore Police Department for wrongful arrest and unwarranted physical abuse. But as a condition of settling the case, the city and police department required Ms. Overbey to agree to a gag order that silenced her from talking publicly about her experience. Ms. Overbey was victimized again by the police misconduct when half of her settlement was taken away just because she defended herself in comments on a blog where members of the public disparaged her personal character for suing the police and accepting a settlement, without any understanding of the level of excessive and illegal force used by the police. The Baltimore Police Department is punishing her by withholding half of her settlement amount for exercising her right to free speech. 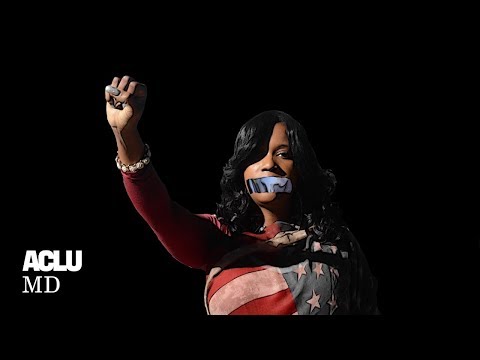 Federal Appeals Court Rules Gag Orders Are Unconstitutional and Unenforceable
On July 11, 2019, in a striking victory for the free speech rights of the mostly Black and Brown residents of Baltimore who are survivors of police abuse, the United States Court of Appeals for the Fourth Circuit has ruled that the City’s practice of requiring non-disclosure agreements, or “gag orders”, on people settling police misconduct cases brought against the Baltimore Police Department (BPD) violates the First Amendment. Today’s ruling, which holds that the gag orders equate to the payment of  “hush money” to keep victims quiet, making them unconstitutional and unenforceable.
“I stood up for what’s right and I am absolutely ecstatic about this ruling in favor of the people and their free speech rights,” said Ashley Overbey Underwood, who challenged Baltimore’s gag order policy. “People should be able to tell their stories and defend themselves when they are seeking justice, especially when the City gets to tell their side. It gives me hope that we can see change for people and movement for police reform.”

United States District Court for the District of Maryland

ACLU speaks out after Audit Design Team announces that 100 in...