A federal lawsuit was filed in February 2016 challenging President Trump's Muslim ban executive order, charging it violates the Constitution - including the First Amendment's prohibition of government establishment of religion and the Fifth Amendment's guarantees of equal treatment under the law - and federal laws.

The lawsuit was brought by the American Civil Liberties Union, ACLU of Maryland, and National Immigration Law Center on behalf of HIAS and the International Refugee Assistance Project at the Urban Justice Center, along with individuals, including U.S. citizens, impacted by the ban. The complaint was filed in U.S. District Court in Maryland. 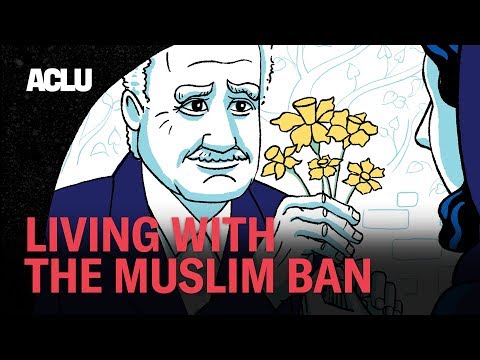 %3Ciframe%20allow%3D%22autoplay%3B%20encrypted-media%22%20allowfullscreen%3D%22%22%20frameborder%3D%220%22%20height%3D%22315%22%20src%3D%22https%3A%2F%2Fwww.youtube-nocookie.com%2Fembed%2Fmtg9tasyUgw%3Frel%3D0%26amp%3Bcontrols%3D0%26amp%3Bshowinfo%3D0%26autoplay%3D1%26version%3D3%26playsinline%3D1%22%20width%3D%22560%22%3E%3C%2Fiframe%3E
Privacy statement. This embed will serve content from youtube-nocookie.com.
It has been 365 days since President Trump signed Executive Order 13769, his first Muslim ban. To mark the anniversary, we invited people to share how the ban affects their lives. Stories poured in from the United States and abroad; of families separated, weddings postponed, and lives uprooted. This is one of the many stories of people affected by the Muslim ban.

The ACLU Foundation; The National Immigration Law Center; The ACLU of Maryland