With two weeks left in the General Assembly session, it's crunch time for ACLU of Maryland’s 2019 education priorities!
Here's where we stand:

The “Blueprint for Maryland’s Future” (HB1413/SB1030) bill is the first action on recommendations from the Kirwan Commission. The bill as introduced includes funding for expanding pre-kindergarten, increasing teacher salaries, and providing grants for concentrated poverty and special education. The ACLU testified in support of this bill, urging state legislators to develop a targeted and comprehensive formula which is the only way to seriously begin to combat decades of gross underfunding for students and families. As of now, the Kirwan “Blueprint” bill is pending the results of the State Budget process. 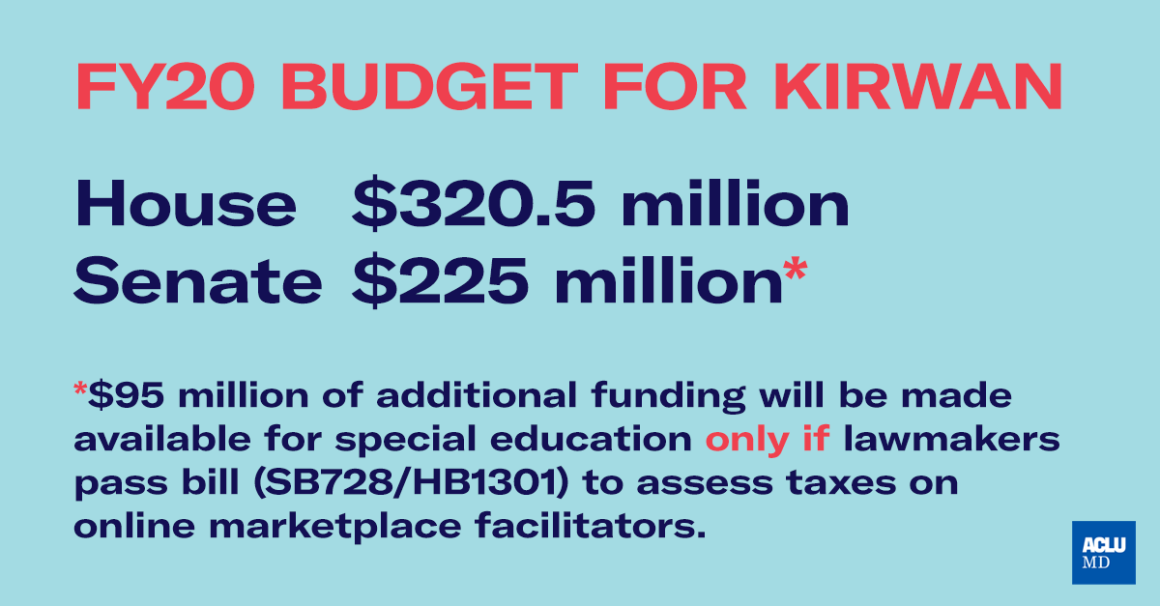 Currently, the House and Senate versions of the budget (SB125/HB100) do not match. Only the House version of the budget funds the entire Kirwan “Blueprint” bill. The House Appropriations Committee, chaired by Delegate McIntosh (a Kirwan Commission member), passed the Budget with $320.5 million set aside for Kirwan for school year ’19-’20. The Senate passed a version of the budget that cuts Kirwan funding by 1/3, totaling $225 million. And the cuts are coming from special education funding, which slashes one of the important areas addressing equitable outcomes. The Senate plan includes a caveat that $95 million can be restored to special education if SB728/HB1301 passes—a tax related to internet/mail-order retailers. The ACLU continues to push for consideration for equity at every decision point in this process.
We are fighting to get Kirwan out with the full first step funded per the Kirwan Commission (House budget version). This will be determined by the House-Senate budget conference committee which is meeting now. Whether any of that money actually reaches schools and classrooms will depend on whether the Governor chooses to release it. As of now, the Governor has not indicated whether he will release funds in the budget for Kirwan under the House and Senate plans.
Legislators need to know Marylanders from every jurisdiction support building a world-class system for every student.
TAKE ACTION: Tell legislators to fully fund the Kirwan “Blueprint” bill in the budget.

The ACLU has been pushing for over a decade to get more funding to address Baltimore City's deteriorating public school buildings. We worked with city advocates in 2013 to win the city's $1 billion dollar 21st Century Buildings Program, which will lead to about 28 new and fully renovated schools citywide. But without additional funding, the remaining 100 school buildings in the city will continue to fall apart.
This year, school construction has become a major issue in the General Assembly and several school construction funding bills have been filed by various city and county legislators, and from the Governor. The ACLU testified urging the General Assembly to ensure that funding priority in these bills is given to the schools in the worst conditions and in districts that have the least fiscal capacity to address them. It is essential for state legislators to prioritize funding to address disparities in school facility conditions to ensure that Black and Brown students, as well as those in low-wealth districts, do not continue to bear the burden of attending the oldest and most deficient schools in the state.
In an effort to combine these efforts, the House of Delegates passed the “Build to Learn Act of 2019” (HB727). This bill should generate an additional $2.2 billion for school construction projects statewide over the next 4 to 5 years, which more than doubles the annual “regular” school construction funding. Every county in the state would benefit from the bill. Baltimore City could continue rebuilding its schools with an estimated 10 to 15 additional new or fully renovated school buildings. 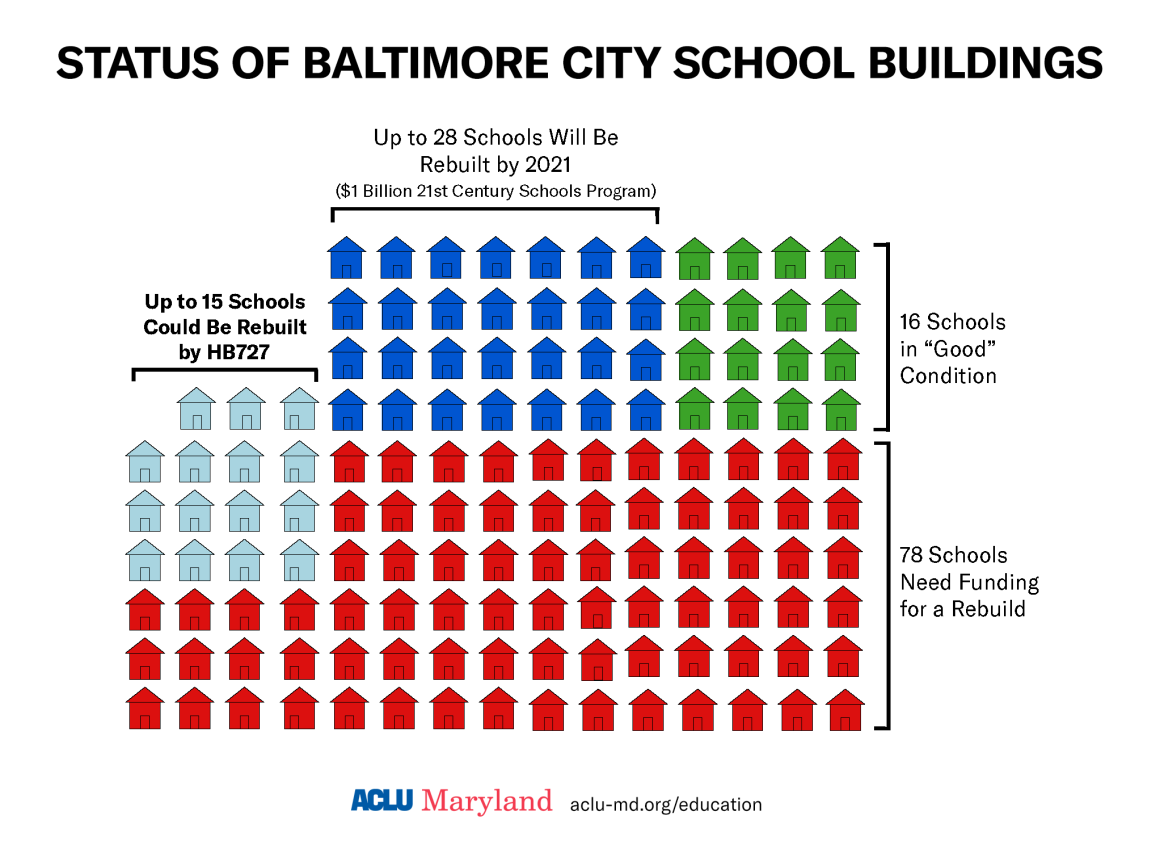 The ACLU believes that the state constitutional obligation to sufficiently fund education includes ensuring that school buildings are safe, healthy, and equipped with modern technology to support a 21st century education. We support this bill as the need for renovating and building new schools in Maryland far outpaces available funding each year—especially in Baltimore City and other low-wealth districts. Now, the Senate is set to decide on this bill.
The hearing date is Wednesday, March 27, at 1pm in the Senate Budget and Tax Committee watch the livestream here. Scroll down and on the right side of the screen, click on the red On Air button next to Senate Budget and Tax Committee.
TAKE ACTION: Call your state Senators and ask them to vote “YES” on House Bill 727.

The ACLU has been advocating for polices that build a positive school climate in Maryland schools. Last week, ACLU joined students, parents, teachers, and other advocacy organizations, including Baltimore Algebra Project, BMORE, Teachers Democracy Project, and more to testify in opposition of HB1373, which would have authorized Baltimore City School Police to carry loaded guns throughout the school day.
We are happy to report that this bill was voted down in the Baltimore City Delegation and was not referred to committee. “We appreciate the leadership of Baltimore City Delegates who opposed. Moving forward, we urge them all to focus on fully funding our schools and building a positive learning environment for the city’s next generation, our children,” said Dana Vickers Shelley, ACLU of Maryland’s Executive Director, in response to the vote.
The General Assembly is making progress on a comprehensive package of six bills introduced this year to build a positive school climate and support the implementation of restorative approaches. These bills are a direct response to recommendations from the recent report from the Maryland Commission on School to Prison Pipeline and Restorative Practices, on which Kimberly Humphrey, Esq. served for the ACLU.
The package of bills cover areas in implementation of restorative approaches (HB725/SB766, testimony; HB1229, testimony; HB1208, testimony), data analysis (HB704; HB950, testimony), and guidance for school resource officer conduct (HB439, testimony). All bills in the package except HB950 passed in the House and crossed over to the Senate. In addition, the ACLU testified supporting two other school climate-related proposals, including guidelines on trauma-informed approaches (SB223/HB256, testimony) and establishing a statewide standard definition for what is a community school (SB661/HB733, testimony).
TAKE ACTION: Call your state Senators in the Education, Health, and Environmental Affairs Committee and urge them to vote “YES” to support building a positive school climate with restorative practices in schools across the state.

Learning During COVID-19: Black and Brown Children Deserve the...