This month, we are celebrating Asian American and Pacific Islander Heritage. We are so pleased to highlight an amazing activist, Ying Matties, who was crucial in the effort to end the ICE contract in Howard County. She is part of the Howard County Immigrant Justice Coalition and the Chinese American Network for Diversity and Opportunity.

I became involved around immigration rights work after Trump got elected. Hate and xenophobia intensified and there was an increasingly high level of fear. I remember I would carry around a photocopy of my naturalization card, just because I was so scared of being stopped and questioned.

I was born in Beijing, China, but I came to Maryland in 1996. I have always faced racism while I was here, mostly in the form of microaggression. It took a long time for me to understand what this kind of racism looks like or what kind of harm it can do to people. I am an immigrant who was naturalized more than fifteen years ago. White supremacists don’t care about your immigration status. You are always an outsider to them.

This is one of the reasons I advocate for a better future for Maryland immigrants. My work, along with the work of many other great community members, was instrumental in ending the Howard County IGSA agreement with ICE which allowed the local detention center to hold immigrants for ICE processing.

This type of IGSA agreement is similar in its impact to another ICE effort, the federal 287(g) program. This program allows local police departments in certain counties to collaborate with federal immigration officers. Not only do these programs promote racial profiling, but they are not effective at reducing crimes.

Cecil, Frederick, and Harford counties currently have 287(g) agreements with ICE in Maryland. This program instills fear within immigrant communities and it alienates and racially discriminates against them. The people arrested and processed through the 287(g) program are overwhelmingly nonviolent, and are pretextually arrested for traffic offenses so they can be questioned about their immigration status at the jail, have immigration proceedings initiated against them, and then deported, even though they and their families have been peacefully living and working in our communities. In Frederick alone, over 1500 Marylanders have been processed for deportation since 2008.

Most people who are processed through the 287(g) program are Black, Latinx, and People of Color.

Our coalition was formed in Howard County in September 2019. We were opposed to Howard County’s contract with ICE because we believe that activism begins locally. Collaborating with an agency whose practice is racist and cruel makes a mockery of the self-proclaimed values of inclusion in our county. The notion that Howard County operates a ‘better’ jail is also a myth. In fact, even the Department of Homeland Security under Trump found that the Howard County Detention Center violated ICE detention standards and “threatened the health, safety, and rights of detainees."

The Coalition engaged the residents in the county through townhall meetings, petition drives, multiple protests, and social media campaigns. We met with elected officials throughout the year. Last September, County Council member Liz Walsh filed legislation to end the contract, and I testified on behalf of the Coalition in support of the bill. It passed the County Council with a 3-2 vote but was immediately vetoed by County Executive Calvin Ball.

Our continuous push eventually paid off and the contract ended in March 2021.

We celebrated when not only the ICE contract ended, but also when the Dignity Not Detention bill was passed in the General Assembly this legislative session. That bill ends county jail contracts for immigration detention and protects undocumented drivers from being questioned by police about their immigration status during routine traffic stops.

I am very proud of all of the work we have done here. I am also thankful for my unique perspective as an immigrant. I have heard people commenting that I am ‘too Chinese’ or ‘too American’. I am fully both. What makes me the person that I am is that I can see and understand both cultures and these two cultures enrich my life.

I can only hope that we try to enrich the lives of others who deserve to live peacefully and have their rights respected. That is the part of the reason why I recently helped organize a Stop Asian Hate rally in Columbia – to honor those, especially Asian women, who were killed in March by a white supremacist, and to push back on the sentiment that Asians can be freely discriminated against. 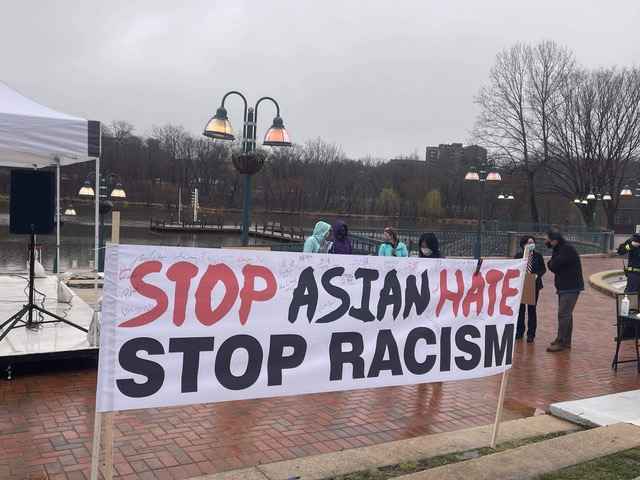 All of us need to develop more empathy for others to continue to advocate for a better life for all of us. And we need to use our privilege to remind others, and ourselves, of how these inequities have stunted all of our lives.

If you would like to support immigrants’ rights work and the coalition that Ying Matties is a part of, follow and like the Howard County Coalition for Immigrant Justice.

What Happened in Atlanta is Not An Isolated Event