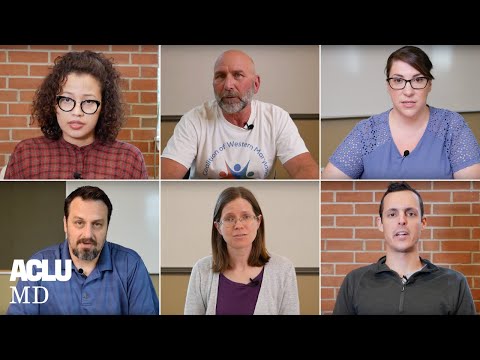 %3Ciframe%20width%3D%22560%22%20height%3D%22315%22%20src%3D%22https%3A%2F%2Fwww.youtube.com%2Fembed%2FvZbZtqEQZI4%3Fautoplay%3D1%26version%3D3%26playsinline%3D1%22%20frameborder%3D%220%22%20allow%3D%22accelerometer%3B%20autoplay%3B%20encrypted-media%3B%20gyroscope%3B%20picture-in-picture%22%20allowfullscreen%3D%22%22%3E%3C%2Fiframe%3E
Privacy statement. This embed will serve content from youtube.com.
Sara Medrano is a Frederick resident who was racially profiled and stopped by a Frederick County Sheriff’s deputy for a “broken” taillight that turned out to be working just fine. The deputy asked about Medrano’s legal status before detaining and illegally holding her to try to get ICE to come pick her up. Now, Ms. Medrano and the Resources for Immigrant Support and Empowerment (RISE) Coalition of Western Maryland are taking action to hold the Sheriff’s Office accountable for their illegal behavior.
“Unfortunately, Sara’s story is common and happening more than many realize,” said Juliana Downey, a member of RISE. “She stands as a beacon for others to share their stories of racial profiling. Hopefully, through sharing her story and others like it, we can prove these partnerships with ICE are discriminatory and dangerous.”
Our diverse community of immigrants in Maryland hold power to advocate for change and the rights of all people. Local groups, like the RISE Coalition, and many local leaders who are residents of Maryland, celebrate the immigrant spirit and actively fight for our constitutional rights. RISE is an immigrants’ rights coalition in our Western counties that politically engages their members to advocate for immigrants’ rights.
“We seek laws and enforcement practices that cultivate the understanding that we are all humans,” said one RISE member.
RISE meets with County Council members and attends Steering Committee meetings about Frederick County’s 287(g) program, which is an agreement between the U.S. Immigration and Customs Enforcement (ICE) and local police departments to exchange money and resources for catching and arresting residents who are undocumented.
Every year, RISE members fight back against 287(g) and speak out at the annual Steering Committee meeting to make sure the truth is told about the racial profiling and harassment that comes out of this agreement. This year, unfortunately, Frederick County Sheriff Chuck Jenkins refused to hold the annual Steering Committee – denying Frederick residents transparency and accountability for the sheriff’s anti-immigrant policies and practices.
“U.S. Immigration policy is flatly racist,” said Juliana Downey, a member of RISE. “My mother is an immigrant from Europe and there are stark differences in the way her family was supported and welcomed when they came to the U.S. and the way Latinx families are treated.”
Sara Medrano’s story of racial profiling, harassment, and fear is far from the only one. Also, in Frederick, Roxana Santos was sitting outside her workplace, taking a lunch break, when ICE officers captured and detained her, and their only excuse for approaching Roxana was because she was eating her food “suspiciously.”
No one should be profiled for the way they look or the language they speak. Maryland’s immigrant residents are vital leaders and beloved members of their communities and families, who all have unique stories, histories, and perspectives that help to shape our culture and environment. But above all, immigrants are people who hold value not for what they offer, but for who they are.
Immigrants have constitutional rights in the United States, and they need to be protected. Please join us in advocating for the rights of Latinx immigrants.
Learn more about Sara Medrano’s legal case.
Click here to watch RISE’s video about Sara Medrano’s story.
Related Issues