Inside Detention Camps: A True Story

By the Sanchez Family

Elmer Sanchez is from Honduras and lives with his U.S. citizen wife, Alyse Sanchez, and two young children, ages 2 and 3, in Maryland. Their family is challenging a cruel practice by U.S. Immigration and Customs Enforcement (ICE) that tricks immigrants who come for appointments required as part of a process to obtain a Green Card and detains them for deportation.
Alyse: “He has been the most important person in my life. He has been there for every important part of my life. Elmer has been my life since I met him.”
Elmer was arrested by ICE when he and his wife came to Baltimore for a marriage interview—a required part of the “stateside” waiver process, an immigration process that allows immigrants like Elmer to obtain a Green Card.
Alyse: “The interview went well. We answered all the questions. It was very simple.”

Elmer was detained for a total of six weeks and three days.

Alyse: “The interviewer said, ‘Okay, I’m gonna’ go ahead and approve your case. Alyse, I just need you to go wait in the waiting room. Elmer, the attorney, and the translators are gonna’ stay in here.’”
His ordeal began at the Frederick County Detention Center, where he was held for five weeks.
Alyse: “They guided me out in the waiting room and I was so excited because he approved it. I called one of my best friends from school. I said, ‘We’ve been approved!’”
For five days in the Frederick Detention Center, Elmer was held in solitary confinement.
Alyse: “The attorney comes out from behind me. Her eyes were red and she guides me out to the hallway. She had the translator there with Elmer’s belongings and she goes, ‘I’m so sorry, but they detained him for deportation.’”
After a week at the Frederick Detention Center, Elmer was allowed to have visitors, but he could only hear his wife’s staticky voice through a phone that barely worked and see his young children through a glass wall.
Alyse: “I just burst out crying. I said, ‘Can I say goodbye to him? Can I see him?’ And she said, ‘No they don’t allow that.’”
Elmer was moved to the York County Prison in Pennsylvania for three days. No more visits with his children.

“They just handed me his belongings and just sent me out the door. Just me. Crying. Walking to my car alone. I cried a lot that day.”

Alyse: “They just handed me his belongings and just sent me out the door. Just me. Crying. Walking to my car alone. I cried a lot that day.”
Elmer: “When they arrested me, I felt horrible because they put chains on me — on my ankles, hands, and waist. They locked me in a small jail cell alone for five days. They called this place ‘the punishment.’”
Alyse: “I was not able to hear from him. We were not able to communicate for almost a week.”
Elmer: “I kept asking if I could take a shower, but none of the guards would let me. They passed me food through a small hole. You only eat and sleep. Eat and sleep. Sometimes, the guards take your food and throw it in the trash. I couldn’t take it any longer.”
Alyse: “When the three-year old asks for daddy, we just say, ‘Oh, daddy is not here. Daddy is at work. We’ll talk to daddy soon.’”
Elmer: “The lights are always on. The temperature is freezing cold. Very cold. It feels like you are outside in the winter.
Look, they give you very little food and it’s very rotten food. It’s always a small piece of celery, three little carrots, and bread. And if you smell the bread, it smells expired. The cereal is always hard because they leave the bag open. The milk is spoiled. You’ll see a cheesy substance at the bottom of the gallon. You have to drink it slowly because if you drink it quickly, you’ll get sick.
"I couldn’t take the pain in my stomach any longer.

"That is ICE’s psychological warfare. Rotten food, the lights, freezing AC, and the mistreatment from the guards."

"It’s like a psychological war to force you to sign your own deportation papers. It gets to the point where you just want to be deported because you can’t take it anymore. That is ICE’s psychological warfare. Rotten food, the lights, freezing AC, and the mistreatment from the guards. And they themselves know that you cannot last a long time in there.”
Alyse: “My mom said, that every day my three-year old would ask, ‘Can I talk to daddy? Where’s daddy? Can daddy tuck me in?’”
Elmer: “But that’s what I understand the purpose of ICE to be, to cause despair within people, because I couldn’t bear it any longer. After the 11th day, I didn’t feel any ounce of strength. When the ICE officer told me that there was an airplane here to deport me, I gave thanks to God, because I couldn’t take it any longer.”
Alyse: “Both kids cry at night for him. They seem to have a lot of anxiety.”
Elmer: “They told me, if I didn’t sign my own deportation order, I would have to give a finger print. If I didn’t give it, they had four guards behind me that would grab me by the arms and legs, force open my hand, and force me to give my finger print.
"The reason I didn’t sign was because I couldn’t abandon my kids or wife. All that I have is her and them. Here is where my family is.”
Alyse: “When I got to see him for the first time, I was crying because I didn’t realize it was going to be behind glass.”
Elmer: “I don’t have anything in Honduras. I’ve lived here for 13 years. My mom died almost a day before I was arrested. So then, I only have my children.”
Alyse: “The kids saw him for a little bit while he was behind glass. And the kids couldn’t understand why they couldn’t come around the wall and hug him. I asked, ‘Why is he behind glass like a murderer?’ We can’t hug him. It’s almost the same as if he’s not there.”
Elmer: “I love my wife and kids very much. But what scares me most is leaving my children alone because they have no fault in this. That is the ugliest part of all of this. Many homes are being destroyed because of a government policy. Nobody wants to leave their children. That is the trauma that stays with a person—being separated from your family. That is the trauma that will always stay with me.”
The ACLU and Venable LLP filed for a temporary restraining order to prevent Elmer’s deportation and were able to have him released from ICE custody on June 19. Elmer was reunited with his family that very same day.
Alyse: “When the kids saw Elmer for the first time the other day, their faces lit up. My three-year old was literally shaking and screaming, ‘Papi, papi, papi!’ He was almost crying the words. He was so excited.”
As happy as the reunion day was for the family, sadly, the trauma from being held in detention is still with Elmer.
Elmer: “I feel different — a bit strange. I feel sorrow because it’s not just my case. Inside, many people are going through the same thing. It’s another world in there.
"Even if you’d like to feel strong and say you’ll forget about it, it’s not something that can be forgotten so easily, because its psychological fear that they put into you.
"I have so much fear inside my apartment. I have my kids playing in their room with the TV on low volume, and silence in the living room so that I can hear who is passing by, to hear what is happening outside of my door. That is the fear that I feel.”

Alyse: “I want ICE to stop tricking people. We went in for our interview. We’ve spent years trying to get to this point, only to have everything taken away from us.”
Elmer: “ICE should work alongside justice, not hate or racism. They don’t do this to white immigrants.”
Alyse: “We’ve been doing everything together and it’s so heartbreaking to be separated.”
Elmer: “ICE does not care about anything — no one. It wants to clean this country of the people like us.”

Alyse: “I want people to know that our family is just like any other family. We are a hardworking family. We love each other.”
Elmer: “Immigrants should be treated justly. They deserve an opportunity.”
Read more about the ICE “bait and switch” case here. 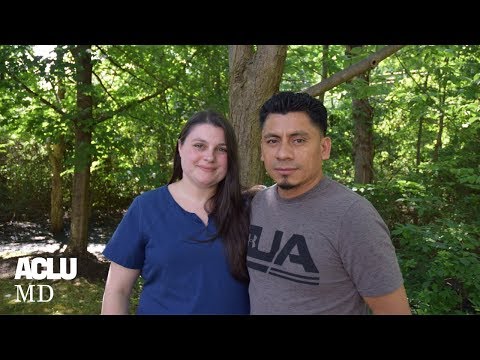 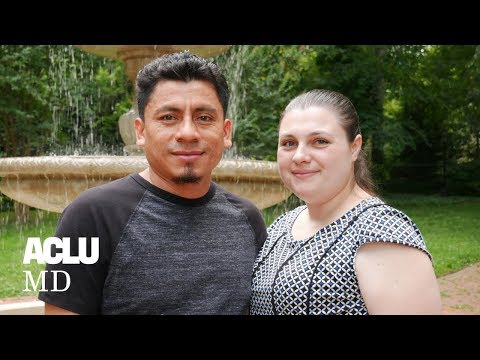 Love Prevails! Immigrant Couple in Maryland Reunited After Being...

Baltimore Immigration Judge Refuses to Postpone Court Dates in the...

DEFEND THE RIGHTS OF IMMIGRANTS IN OUR COMMUNITIES!