Latinidad is complicated for me. It’s the transgenerational trauma passing through our bloodlines. It’s the constant reminders of the horrors our ancestors suffered and the atrocities some of our other ancestors likely committed. Latinidad is being hurt, learning from our abusers, and subjecting our very own to that same persecution. Latinidad is a violent term in itself: A monolith that erases Black and Indigenous people, it works to silence the experiences of non-white/mestizo people both in the United States and abroad.

For me, Latinidad feels like being isolated between different worlds. Ni de aquí, ni de allá, or from neither here, nor there. It’s celebrating “independence” and sovereignty during Latinx Heritage Month, despite most of Latin America being anything but free from American imperialism. Latinidad means being hurt by more than one country, all of whom share the same traumatizing institutions that continue to hurt our families. One of these institutions is mass incarceration and the deportation-industrial complex.

Black and Brown people have never been fully accepted into American society. Along with criminalization and fear mongering, the U.S. immigration system is another racist tool used to exclude people of color. The immigration system that immigrants of color are faced with today -- as well as historically, dating back to the Chinese Exclusion Act of 1882 -- is completely different and much more hostile than what white European immigrants ever experienced.

First, there is the fairly recent formation of the U.S. Immigration and Customs Enforcement (ICE) agency in 2003. Then there is Trump’s recent attacks on Black and Brown immigrants via blatantly racist rhetoric. And there is how policies in our supposed “Nation of Immigrants” have been created and implemented to specifically target immigrants from Central America, including family separation, denial of counsel during immigration proceedings, caging children, and the incarceration of asylum seekers.

Even though unlawful presence is not an actual criminal offense in the United States, and even though immigrants are less likely to commit crimes compared to American citizens, there is no other country that criminalizes and punishes Black and Brown migrants like we do. Together with having the largest incarcerated population in the world, the United States also operates the world’s largest immigrant detention system, with roughly 380,000-442,000 immigrants imprisoned within our borders every year.

Maryland is not free from this racist and inhuman treatment towards immigrants. In our own state, Black and Brown immigrants have been targeted on our streets by ICE. In 2008, Roxanna Santos, a woman originally from El Salvador who has four children, was racially profiled by Frederick County Sheriff Deputies while she was sitting outside her workplace, taking a lunch break. ICE officers captured and detained her, with the flimsy excuse Roxana was eating her food “suspiciously”. Roxana rightfully sued for unlawful and racist detention and the courts agreed with her. Yet ICE unexpectedly detained her for deportation again this past January, even though a judge ordered Roxana to remain in the United States through mediation of her case.

On July 7 2018, another Latina and longtime resident of Maryland, Sara Medrano, was racially profiled and stopped by a Frederick County Sheriff’s deputy for a “broken” taillight that turned out to be working just fine. The deputy asked about Medrano’s legal status before detaining and illegally holding her to try to get ICE to come pick her up.

Watch "We Are Sara Medrano" Video

Both Santos and Medrano were victimized by a program called 287(g). ICE offers 287(g) agreements to local police agencies that incentivize police officers with little training to do the work of ICE agents in exchange for money -- with no accountability for racial profiling or other illegal tactics. 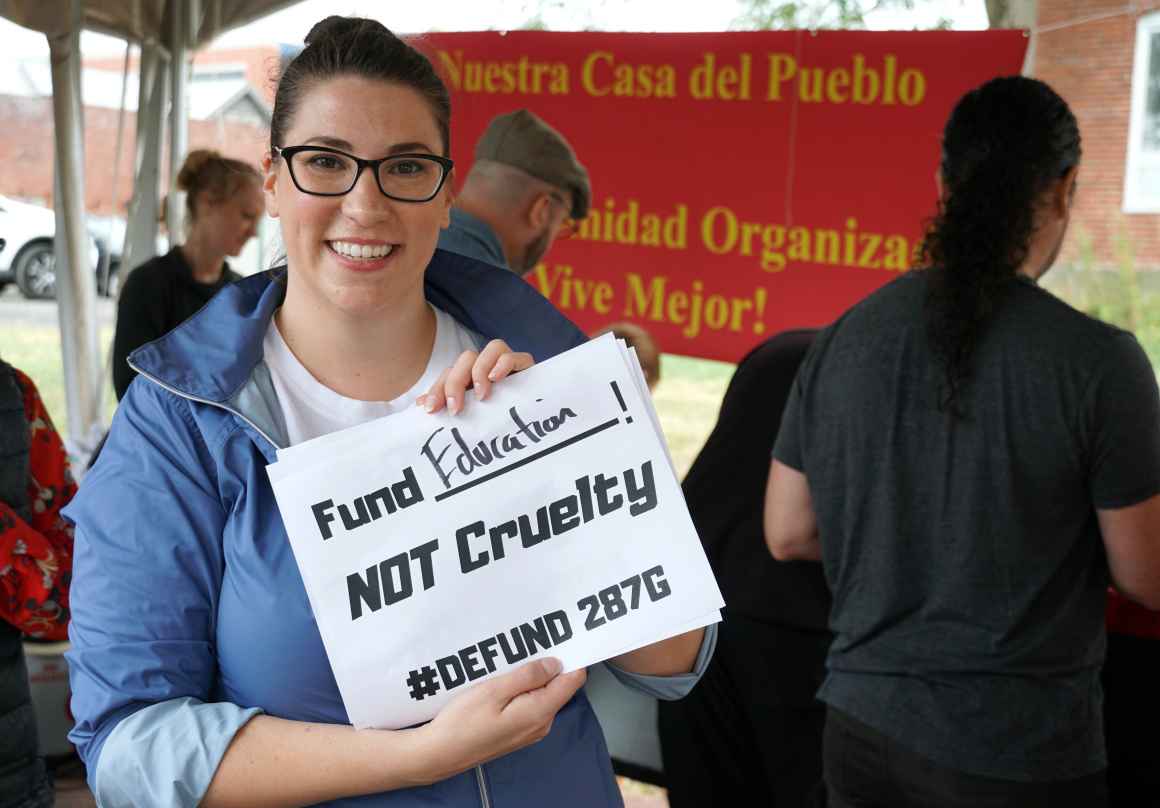 What 287(g) does is encourage local police officers to racially profile Black and Brown people while deprioritizing public safety. It serves as a wheel for the prison/deportation industrial complex. Recently, Frederick Sheriff Chuck Jenkins has taken aim at Montgomery County and Prince George’s County for being what he calls “sanctuary counties”. However, Sheriff Jenkins conveniently failed to mention that both of these counties actually have larger immigrant populations and have experienced larger drops in crime than Frederick since 2008, when the 287(g) program started there.

While mass incarceration and the immigration system expand much further than Maryland borders, Maryland residents can make a difference by not supporting programs like 287(g) and choosing to side with their own neighbors, rather than give in to racist fear-mongering that has never made any community any safer. 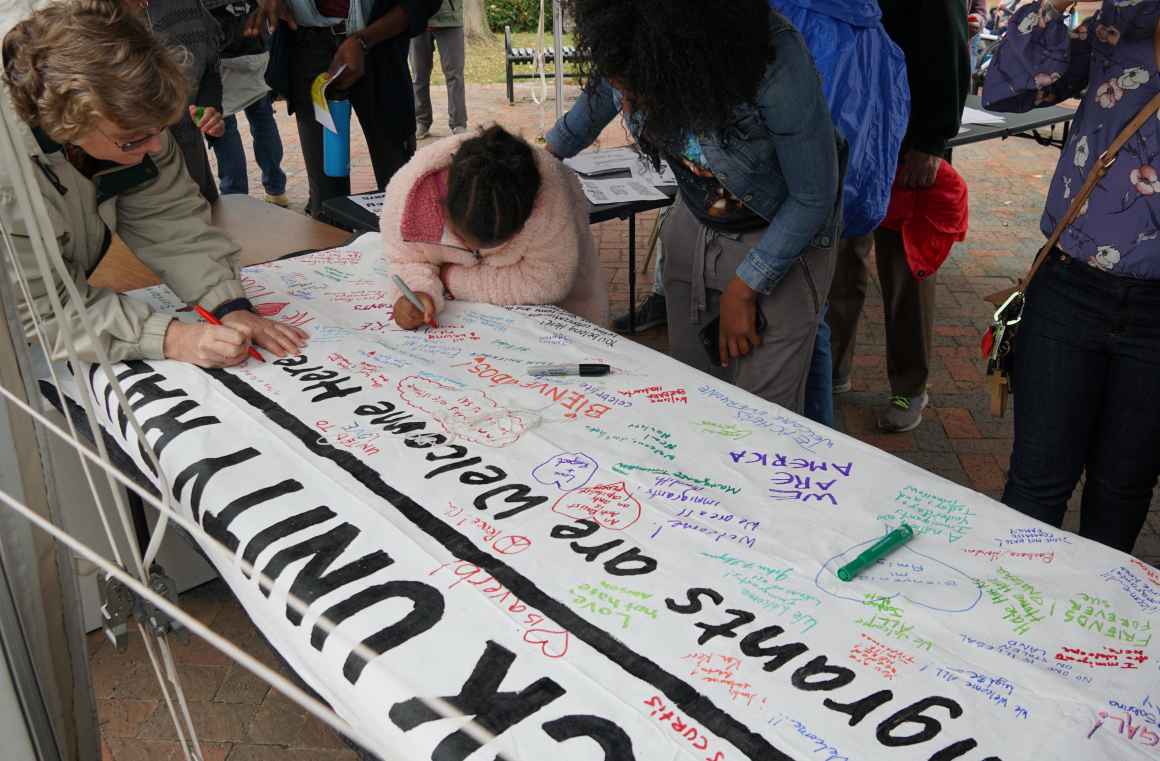 While there may be something to celebrate during Latinx Heritage month, I personally find it more urgent to examine the hurtful aspects of our history and of our present reality, and to become intentional in unlearning the white supremacy that manifests itself so often in every corner of society. If we do not take the time to examine these not so “festive” aspects of “latinidad,” we fail to see and understand the whole community.

RISE UP: How Black and Brown immigrants are gaining power in...

Baltimore Immigration Judge Refuses to Postpone Court Dates in the...