Listen to the audio version

It’s so important to know your rights, especially around this next phase of marijuana laws. So, what’s happening, when is it happening, and what does it mean?

The new marijuana law, passed in the 2022 Maryland General Assembly and strongly supported by voters this week, will reduce the waiting period to expunge a possession with intent to distribute marijuana conviction from fifteen years to three years after the satisfactory completion of the sentence(s) imposed, including parole, probation, or mandatory supervision. The waiting period to expunge a possession of marijuana conviction is reduced to after the satisfactory completion of the sentence, including probation rather than four years, and the automatic expungement of records for simple possession of marijuana issued will be enforced. Marylanders will also be allowed to grow up to two marijuana plants per household. And the allowed personal amount will increase from 10 grams to 1.5 ounces.

Importantly, the new marijuana law authorizes a Community Reinvestment and Repair Fund, to bring resources back to the communities most impacted by racist marijuana enforcement once the industry is established and tax dollars start flowing. Establishing this fund was a key priority of the ACLU of Maryland and our partner Leaders of a Beautiful Struggle, with the support of the national ACLU.

Take a look at the current timeline on marijuana legalization. (We won’t stop here.) 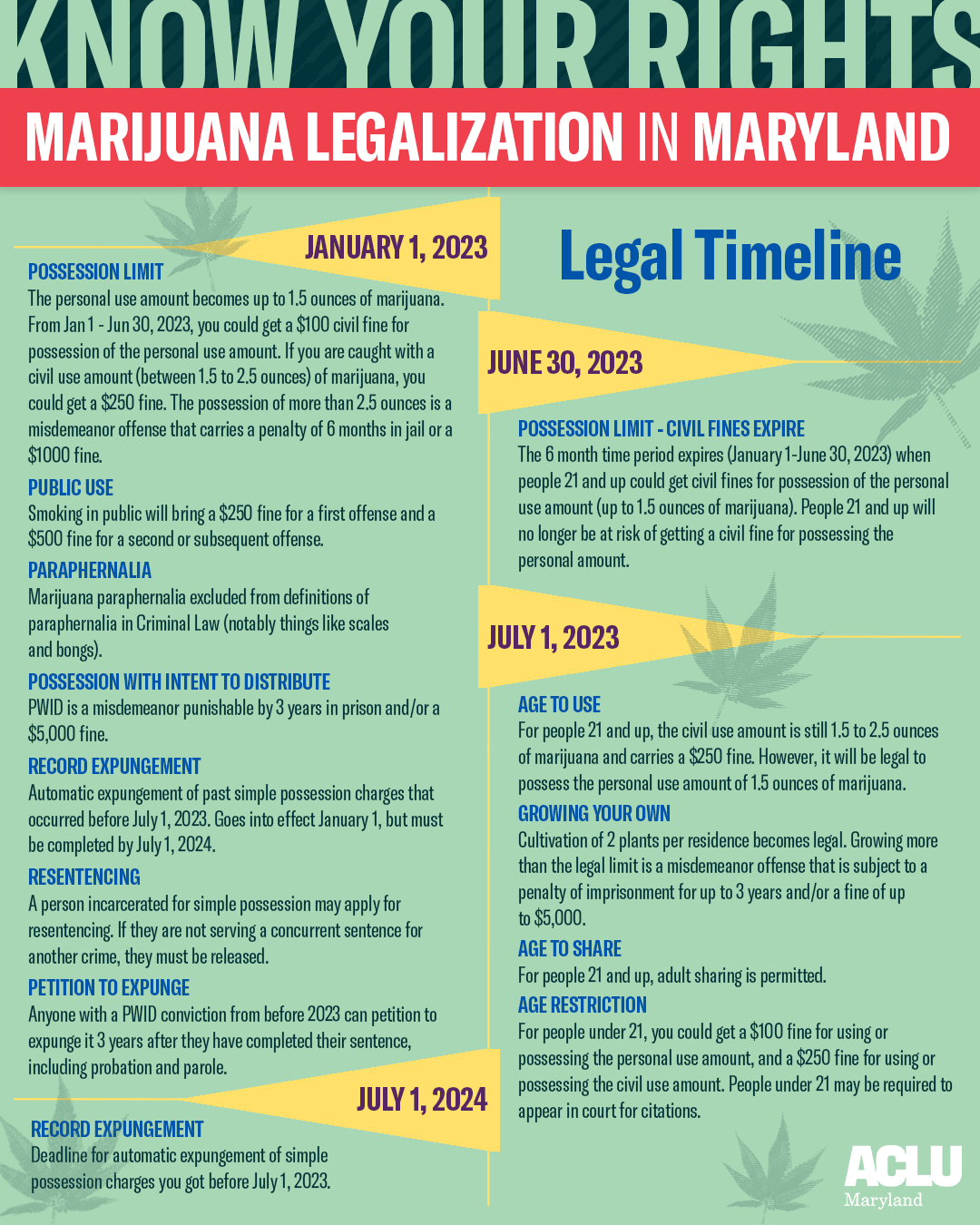 Why is marijuana legalization that includes reparations and redress so important? Research shows that Black drivers are searched at disproportionately higher rates than white drivers in Maryland, even though the data shows that Black people are less likely to be found with illicit drugs and other contraband. In 2018, Black people were 2.41 times more likely to be arrested for marijuana possession than white people. According to "A Tale of Two Countries," a 2020 ACLU research report, even though Black people only represent 60 percent of Baltimore City’s population, between 2018-2019, 96 percent of all marijuana possession charges were filed against Black people in the city.

It’s clear that Black people have faced the brunt of the dangerous ‘war on drugs’ for decades. That’s why marijuana decriminalization and legalization is NOT enough.

These decades of stopping, searching, arresting, and jailing Black people for marijuana related offenses ruined lives, destroyed economic opportunities, and separated families. Now, tax dollars raised through the legal marijuana market must be reinvested in the Black communities that have been most harmed and we must eliminate criminal penalties and limit unnecessary police interactions due to marijuana.

NEXT UP: The ACLU of Maryland and our partners will be back in Annapolis for the 2023 General Assembly session to advocate for two more changes: 1) end criminal penalties for marijuana possession above the civil use amount and for possession with intent to distribute; and 2) prohibit police from using the odor of marijuana as a basis to stop individuals and perform a warrantless search of a vehicle. These racial justice reforms are necessary to help ensure that Black people don’t continue to face the brunt of the consequences of being disproportionately stopped and given with marijuana related charges.

A War on Marijuana, or a War on Black Communities?

People Over Profit: What it will take to end the war on marijuana...