Currently, three Maryland counties – Frederick, Cecil and Harford County – are actively using local police agencies to target and cage immigrants for U.S. Immigration and Customs Enforcement as part of the 287(g) program. The 287(g) program deputizes local police as federal ICE agents who receive minimal training and are incentivized to use racial profiling tactics against mostly Black and Brown immigrants. The belief by some that programs like this keep communities safe stem from several myths. Let’s set the record straight.

These agreements are entered unilaterally by either the Sheriff (Frederick, Harford and Cecil) or the County Executive, with almost no buy-in from, or accountability to, the community. There is little to no transparency in how 287(g) programs actually operate, and as we have seen in Frederick, the sheriff can simply decide to cancel any public presentations on the program’s implementation.

Despite strong community demand, and a formal inquiry filed by Rep. David Trone, Frederick County Sheriff Chuck Jenkins and ICE have yet to release information about the 287(g) program’s operation over the last year, including statistics surrounding arrests and deportations.

Neither Montgomery or Prince Georges Counties have 287(g) programs, and they each have a higher immigrant population than does Frederick. Yet, Montgomery and Prince George’s have lowered their crime rates in recent years at a much greater rate than Frederick has under Sheriff Jenkins and 287(g). See this infographic: 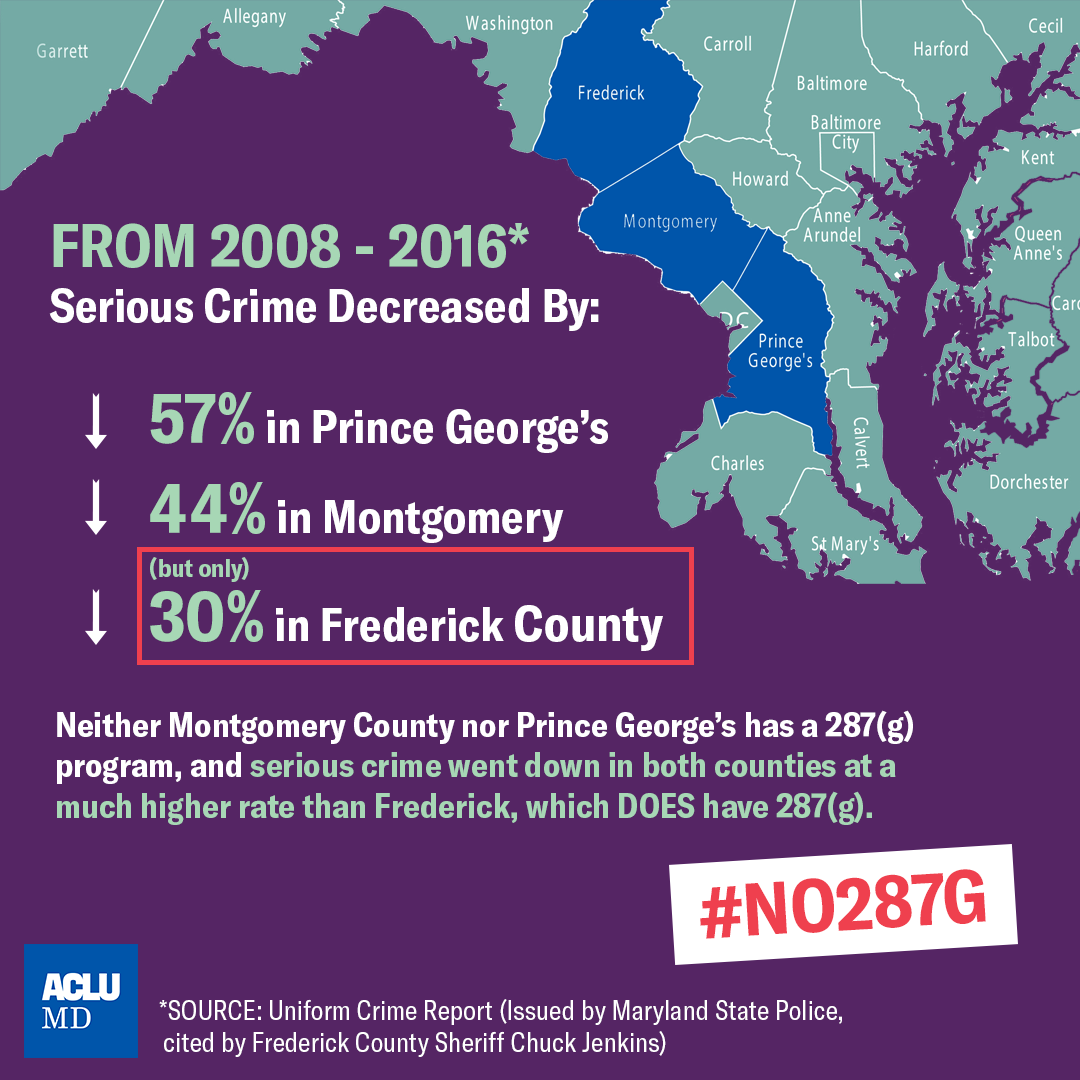 Underreporting of crime is more common in communities where there are local collaborations with ICE for higher immigration enforcement.

A 2017 study makes clear: “Research has shown that immigrants may be less likely to report victimization to the police in the United States for a variety of reasons: language barriers, fear of the police, and fear of deportation (Gutierrez & Kirk, 2017).”1

4. Immigrants DO NOT make communities unsafe.

People make communities safer by relying on and trusting each other. Data shows that immigrants (documented or undocumented) have no effect on crime based solely on their immigration status.

Data from the FBI’s 2019 Uniform Crime Report shows: “Most types of crime had an almost flat trend line, indicating that changes in undocumented populations had little or no effect on crime in the various metros areas under survey… The data suggests that when it comes to crime, the difference between someone who is called a legal immigrant and an illegal one doesn’t seem to matter.”2 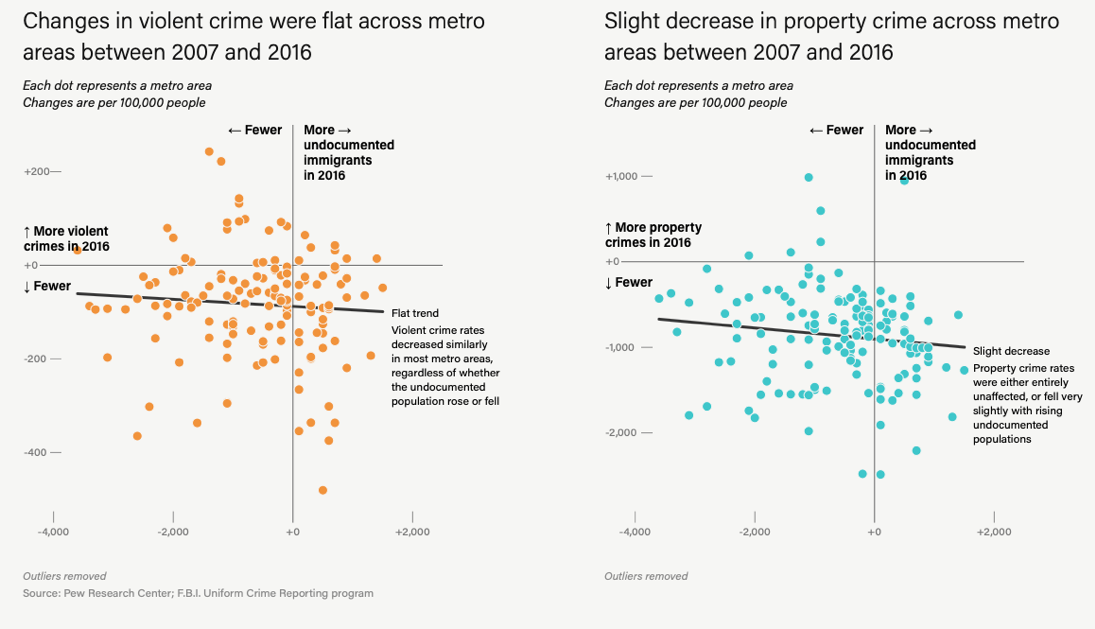 5. Those deported under 287(g) programs are overwhelmingly NOT individuals who have committed serious offenses.

Around half of all deportations are for non-criminal or minor offenses. That’s even higher in Maryland.

Nationally
“Over 15% of deportations are for individuals without any criminal conviction, while minor offenses such as immigration violations and traffic offenses make up another
30% of deportations… These are negligible effects, supporting the hypothesis that increased enforcement did not result in efficiency gains for local law enforcement.”3 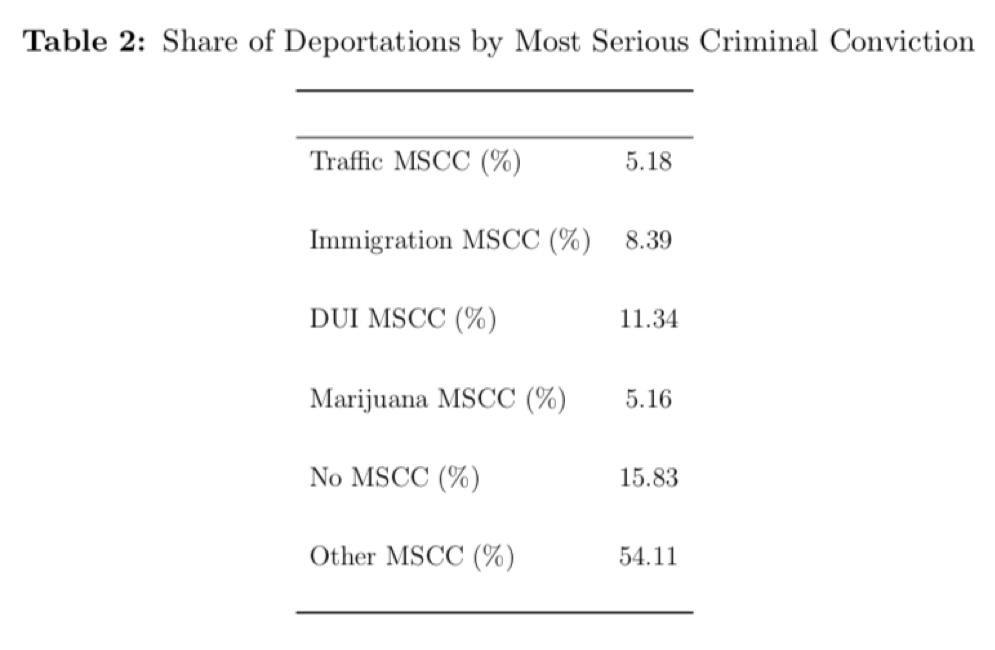 In Maryland
According to the Frederick County 2012 Annual Report, 88 percent of civil immigration detainers issued by ICE were for misdemeanors, many of which were traffic violations. In fact, in 2012, the majority of the over 1,400 people detained for ICE and processed for deportation in Frederick were arrests for non-violent offenses.

6. The deportation system IS racist.

(Update: Read the updated data in Know the Facts about the Racist, Anti-Immigrant 287(g) Program, a blog published on our website on November 2, 2022.)

There are diverse groups of immigrants in the United States from Europe, Africa, Latin America, and Asia.5 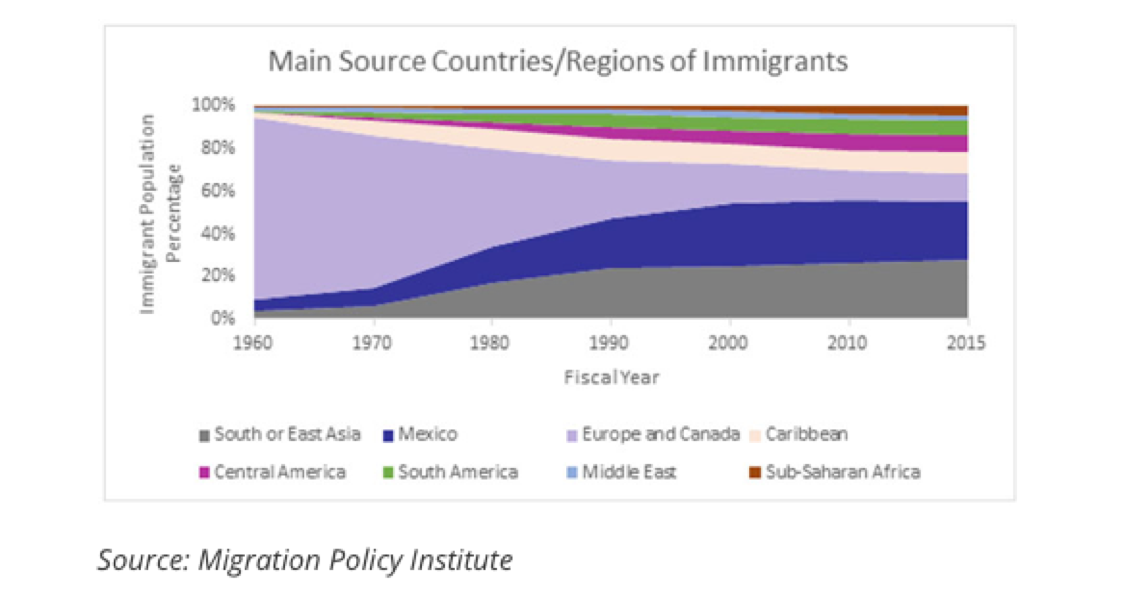 But who gets deported? Around 98 percent of those deported were from Latin and African countries in both 2012 and 2013.6 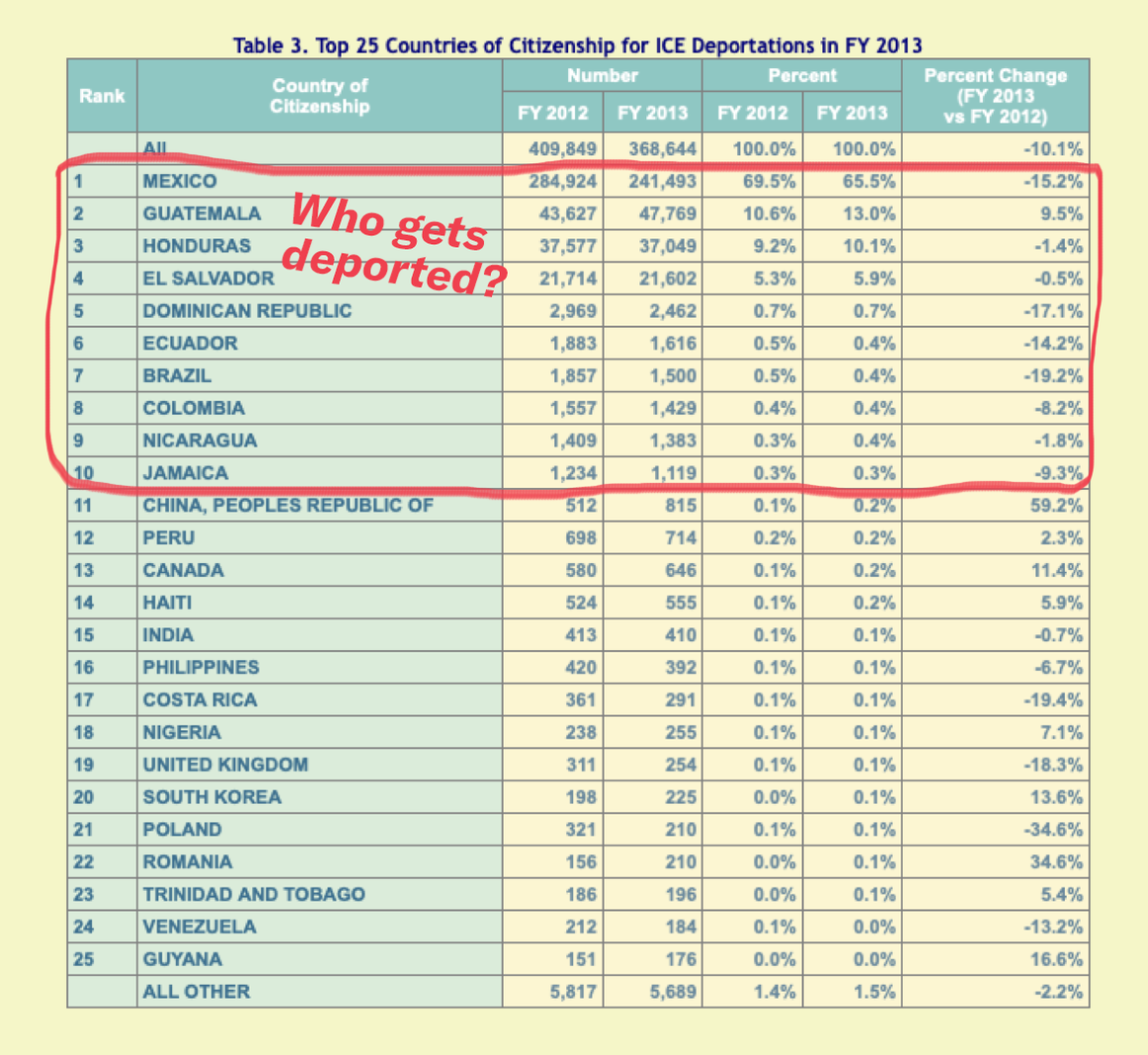 NOTE: Ethnicity is not the same as race. And the race of individuals is very rarely ever reported. Those being deported from Canada could be Black Canadians, but that information is not getting reported. However, given the real stories from Black and Brown people across the nation, we know that ICE targets and racially profiles Black and Brown people for detainment and deportation.

Sara Medrano is a Latina and Frederick resident who was racially profiled and stopped by a Frederick County Sheriff’s deputy for a “broken” taillight that turned out to be working just fine. The deputy asked about Medrano’s legal status before detaining and illegally holding her to try to get ICE to come pick her up.

Sara’s story of racial profiling, harassment, and fear is far from the only one. Also, in Frederick, Roxana Santos, another Latina, was sitting outside her workplace, taking a lunch break, when ICE officers captured and detained her. their only excuse for approaching Roxana was because she was eating her food “suspiciously.”

7. Deputizing local police as ICE agents DOES NOT prevent crime.

Not only have 287(g) programs led to illegal racial profiling and civil rights abuses, but they have diverted scarce resources from traditional local law enforcement functions and distorted immigration enforcement priorities. Police resources are stretched thin for crime prevention.

According to a 2019 report that evaluated immigrant deportations, local crime and police effectiveness: “Counties with more deportations may have had to devote a larger fraction of prior local resources to enforcement, or divert them from other uses. This may be consistent with an actual increase in property crime rates due to more thinly spread resources for crime prevention.”8

Police officers are supposed to serve and protect the public. Local police should serve their community, not do ICE’s bidding. Increasing deportations leads to more unsafe environments because of (1) under reporting of crime, (2) police resources being stretched thin for crime prevention, and (3) deportations for minor things. In areas with a 287(g) program, local police are allowed to racially profile Black and Brown people, and sacrifice the trust of immigrant communities. We need more trust in each other and in law enforcement in order to create safe and trusting communities. Clearly, 287(g) programs are not the route to take in order to accomplish this goal.