UPDATE (March 18, 2022): It finally happened. Maryland's last Confederate monument on public land is gone! Many Talbot County residents and advocates who worked hard to get the statue removed, watched closely on March 14, 2022, as cranes and workers officially "moved the monument" from the courthouse lawn.

It took ten months from the original publication of this blog. After nearly a decade of debate, lawsuits, and protests, the 106-year-old Confederate monument was pulled up from its shameful place on the courthouse lawn. The legacy of racism encouraged by the now-removed statue doesn't disappear with the removal of the monument, but its removal does offer a finishing blow to the memorialization of racist Confederacy on Maryland public land.

Frederick Douglass, one of Maryland's true heroes, now stands as the sole representative outside of the Talbot County court house. The grounds of a courthouse should send a message fairness, even if there's much more work to do to realize that in our legal justice system.

The Confederate statue will be relocated to the Cross Keys Civil War Battlefield in Harrisonburg, Virginia. We are not sorry to see it go. 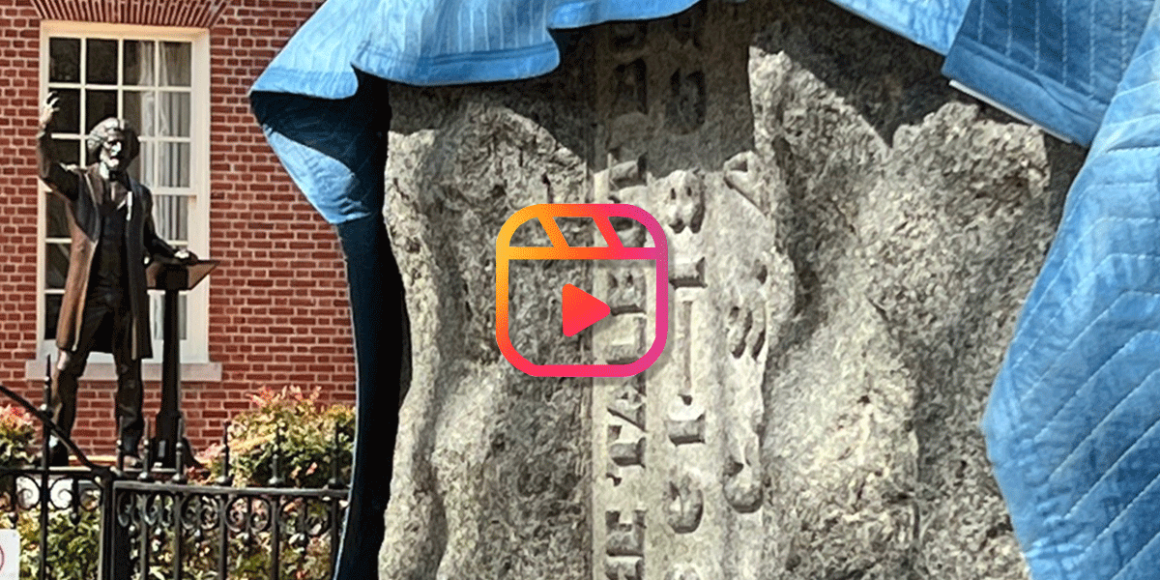 Imagine if we erected statues of the white supremacists who staged an insurrection at our Capital in January of this year. Wouldn’t it be horrible? Wouldn’t we ask why are we glorifying the violence of white supremacists and traitors to the nation? Wouldn’t there be other, more appropriate ways to document this tragic part of our history without erecting monuments for them?

However, when it comes to celebrating traitors to the Union during the American Civil War, this somehow became okay to many. It became okay to glorify traitors and white supremacists in the name of “honoring” history.

The statue is of a Confederate soldier with the Confederate battle flag draped across his back. It is captioned with “To the Talbot Boys, 1861-1865, C.S.A.” 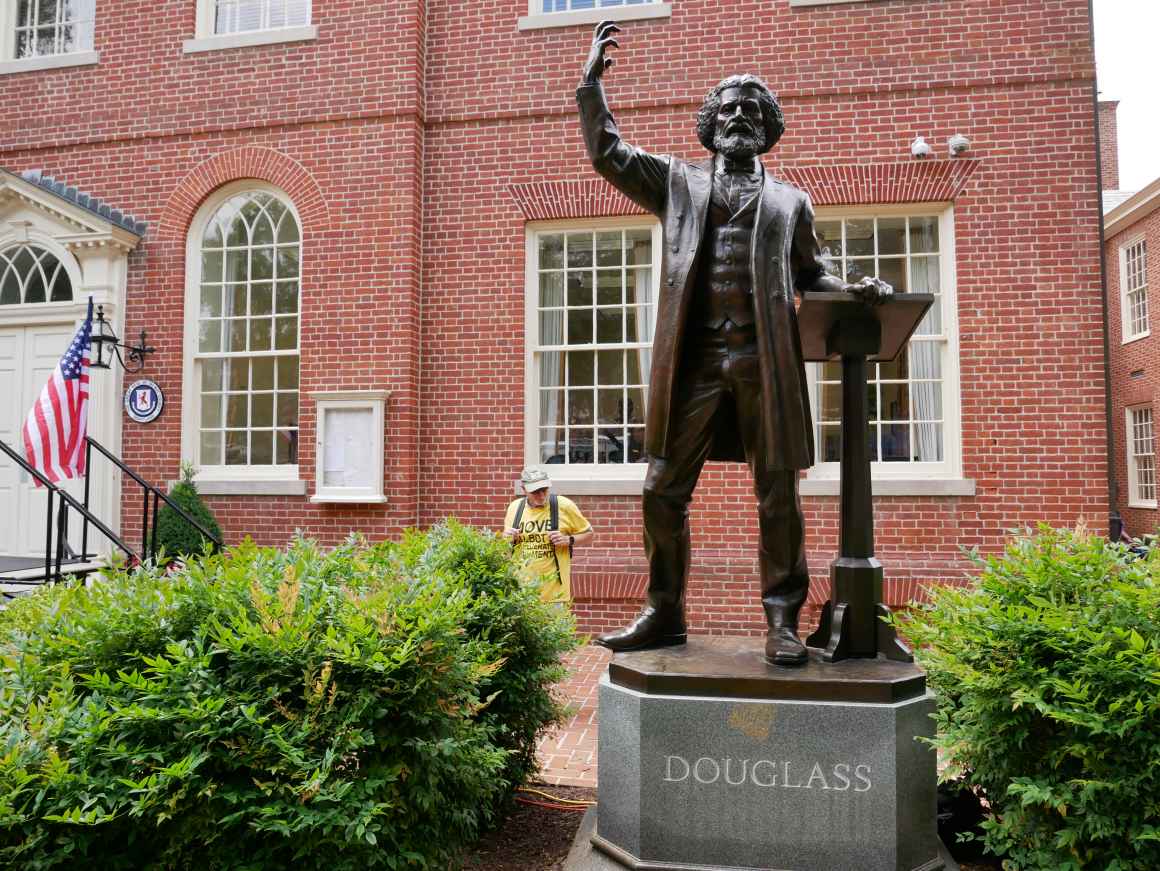 On the same courthouse grounds, there stands a statue of Frederick Douglass, where he gave his famous “Self-Made Men” speech. Mr. Douglass was born into slavery in Talbot County, Maryland, but later became an author and abolitionist. It took years of advocacy from local residents to secure a Frederick Douglass statue in a prominent place in Talbot. It was erected in 2011. It is a shame that it took so long to celebrate an important and relevant historical local hero in Talbot County. Frederick Douglass should not have to share the same courthouse lawn with traitors to the Union who fought for his enslavement.

While Maryland was a state that enslaved Black people, and maintained the system of slavery during and after the war, Maryland wasn’t a Confederate state and did not fight against the Union. It is even more confusing to celebrate the Confederacy, a side that actively fought for slavery, when Maryland aligned with the Union. 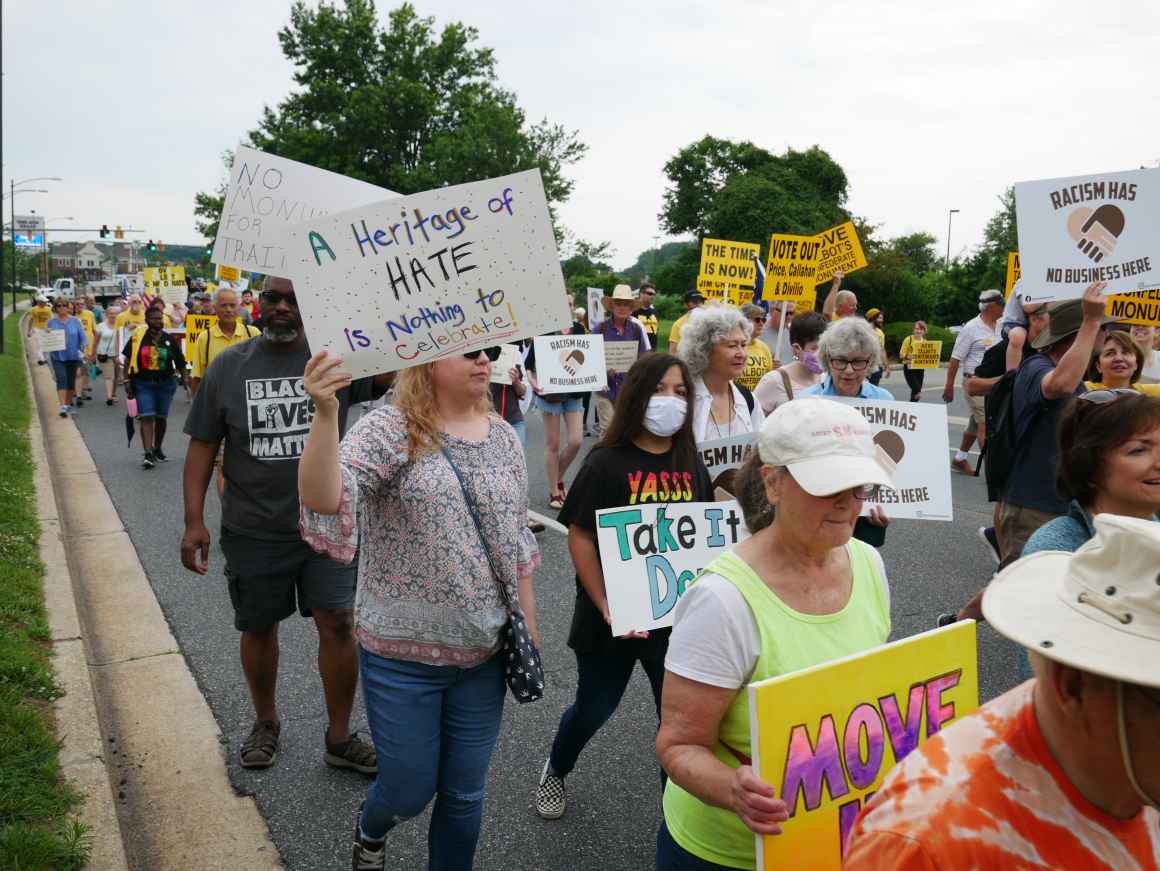 Advocacy to remove that Confederate monument first began in 2015, organized by the Talbot County Branch of the NAACP. Their work began after the murders by a white supremacist of nine Black churchgoers in Charleston, S.C., who frequently photographed himself with the Confederate flag.

The Talbot NAACP’s request was considered but ultimately rejected, when the County Council decided to keep the statue in 2016. Since then, as racist incidents connected to Confederate imagery have continued across the country, advocates have kept requesting its removal. In 2020, following former police officer Derek Chauvin’s murder of George Floyd in Minneapolis, protests and discussions about Confederate statues reached a fever pitch. Jurisdictions across Maryland and the nation have removed their own Confederate monuments. Talbot County officials have allowed themselves to be left behind this racial justice progress sweeping the state and nation. 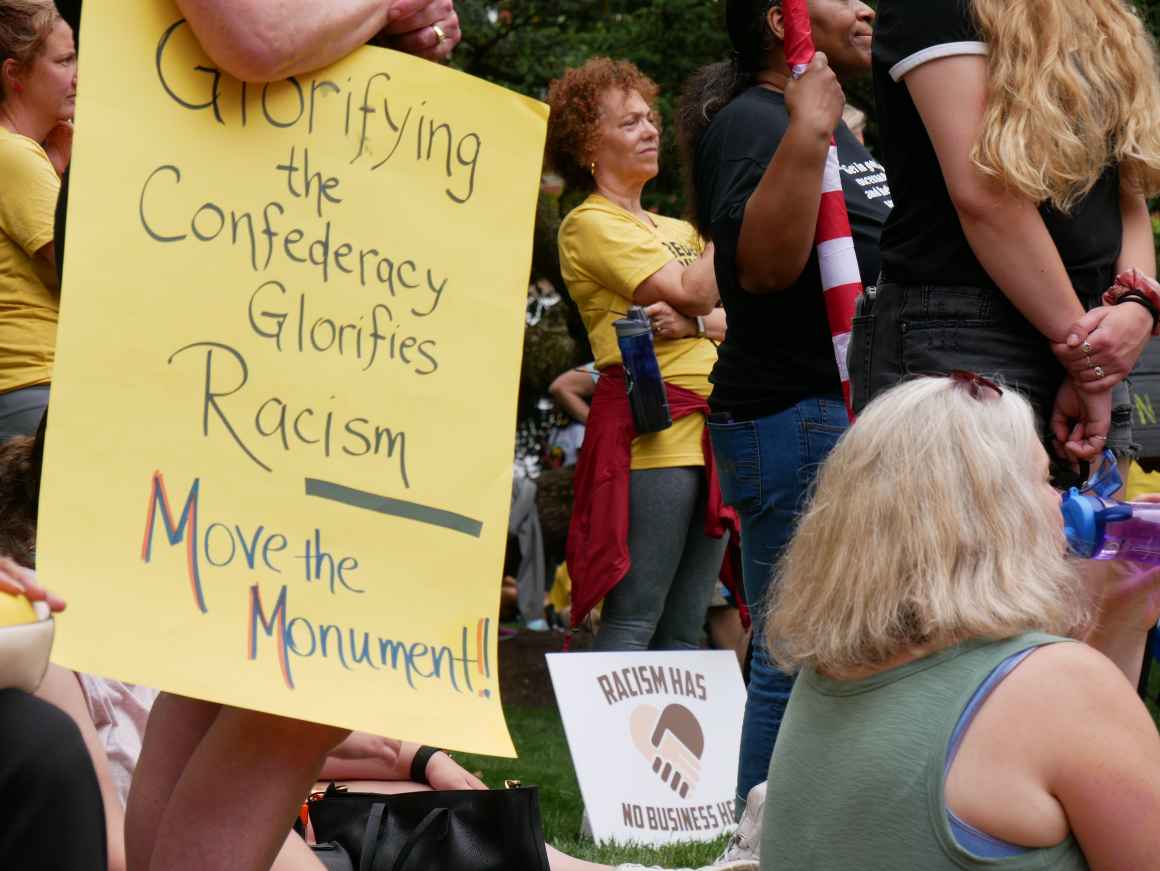 Not only does this statue stand in the same spot as a slave auction block once stood in Easton, we must also keep in mind that it was erected during the Jim Crow era, not directly after the Civil War. This was a time marked by racial intimidation and discrimination, when white people were imposing new segregationist policies to limit the political power of Black people.

This is why this Confederate statue was erected at a prominent courthouse: It was a means of symbolically undermining and intimidating Black people. And to any Black person who walks past it to enter the courthouse today, it is still a racist symbol that undermines their ability to believe they can expect fair justice. 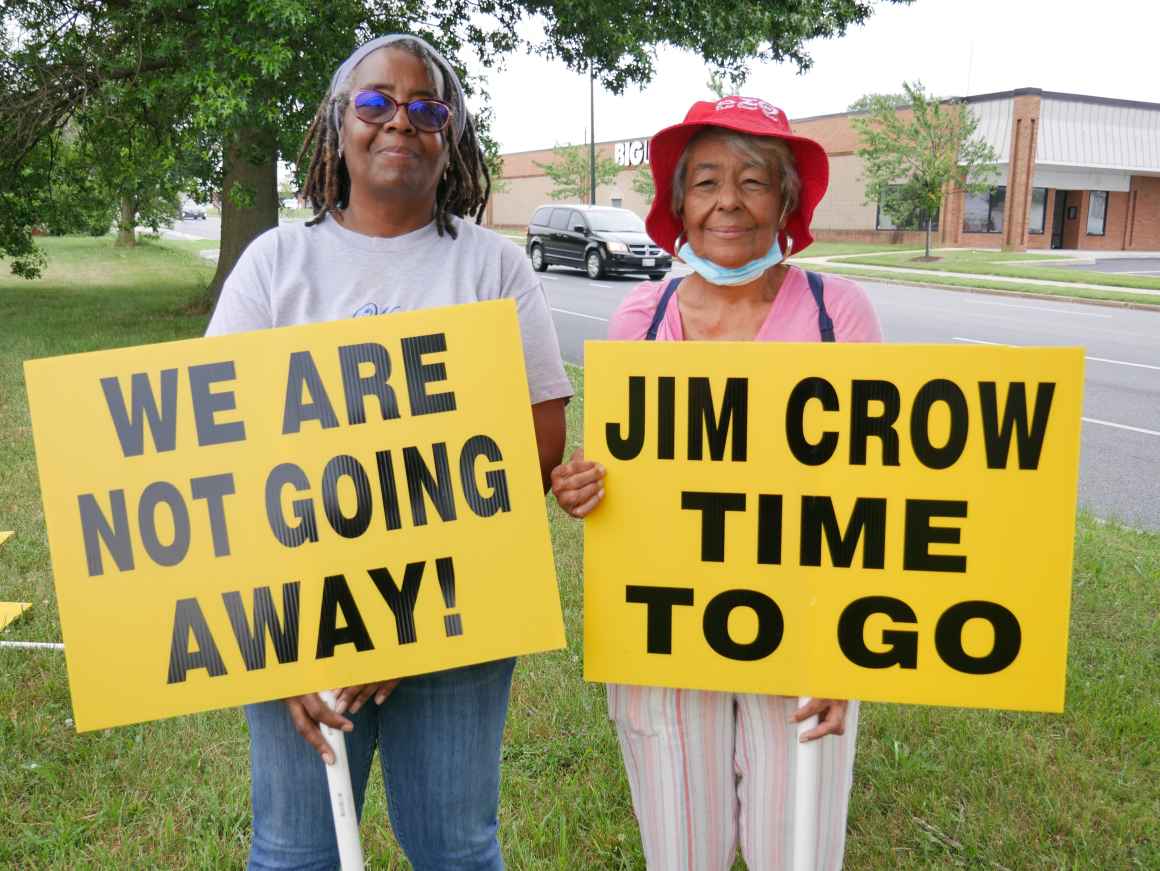 This symbolism isn’t lost on white supremacists. We see time and again during modern-day racist attacks, white supremacists brandish the Confederate flag. From the 2017 Charlottesville attack, where a Black Lives Matter protester was murdered and many others were injured, to the attack on the Capitol by white supremacists who caused the death of police officers as they sought to overturn the democratic election of a president of the United States, Confederate symbols were everywhere.

Moving the Talbot Confederate monument means more than just showing racists that their white supremacist ancestors’ fight to keep slavery should not be honored.  It means showing our future generation of Marylanders that we are dedicated to overcoming white supremacy wherever we see it. We can begin to heal our communities if we just do the right thing. 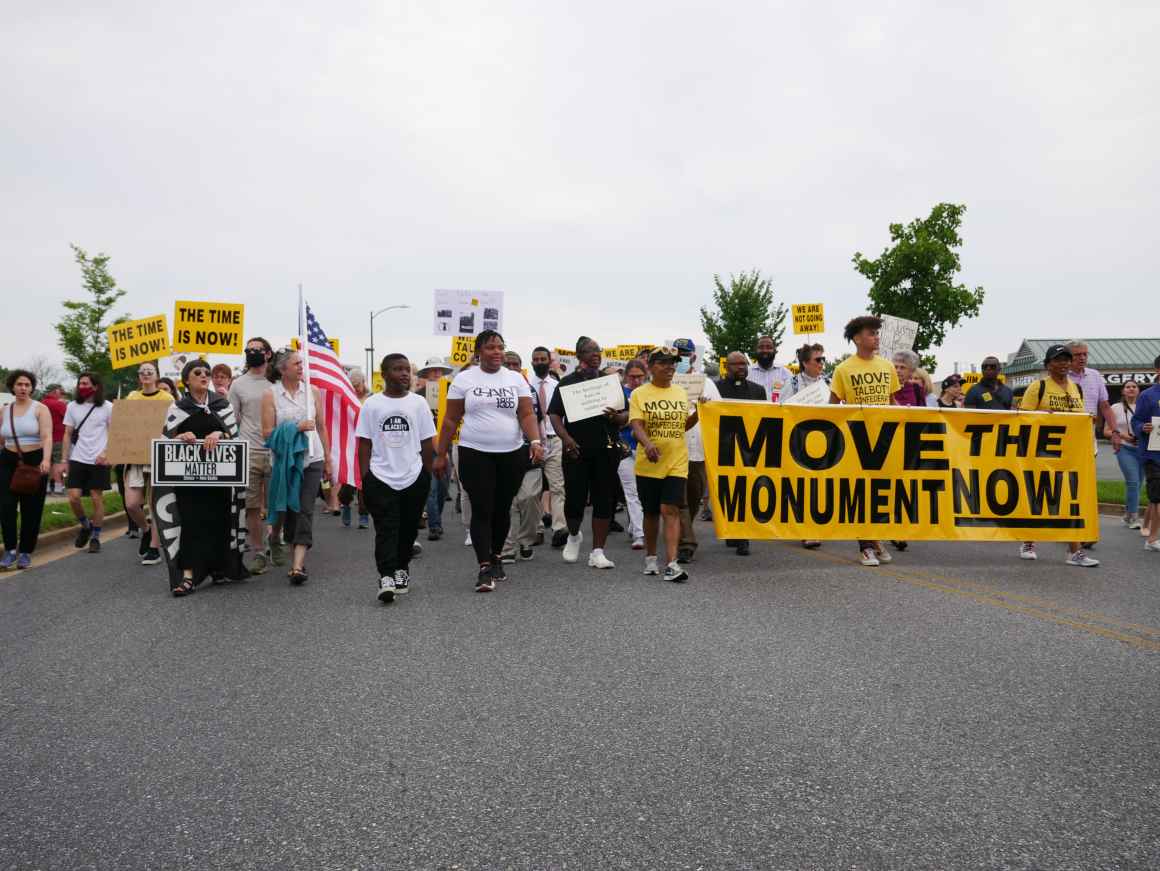