A War on Marijuana, or a War on Black Communities?

TAKE ACTION: Tell your Maryland legislators to vote YES on the Cannibas Legalization with Reparations for the War on Drugs Act (SB 692).

It's 2022. Did Maryland legalize marijuana yet? No. Instead of doing the right thing the state continues to enable a long history of targeted racism. Of the many existing forms of white supremacy still rendering its disturbing pretense on Black communities, the legal issue of marijuana is one of the most profound. For nearly a century, the use of marijuana as a proxy to incarcerate and destroy Black and Brown livelihood has been a strategy best practiced by the United States.

In the 17th century, the United States government supported the manufacture of materials like rope, sails, and textiles from industrial hemp, and the plant was also exchanged as legal currency in states like Pennsylvania, Virginia, and Maryland. By the 19th century, marijuana had become so commercialized that medicinal products were sold openly in public pharmacies. It wasn't until the turn of the 1920s that marijuana became demonized as a violent drug, after the recreational use of marijuana became associated with Black and Brown people.

A decade later, what began as a legal import issue in the 1930s eventually expanded into the Marihuana Tax Act of 1937, as more state governments and countries were banning the substance. This law made it so the importation, cultivation, possession, and distribution of marijuana could be regulated and made illegal.

But it didn't stop there. The decades that followed included harsh penalties for the sale and ownership of the substance, including the "war on drugs" declaration by President Richard Nixon in 1971, which disproportionately ruined the lives and freedom of Black people across the nation. At the time President Nixon noted drug abuse as "public enemy number one," although his words and the subsequent, racially discriminatory actions by police suggested an additional target.

While this blueprint for Black restriction can seem long ago, the foundation of this failed "war" and the sentiments of its surrogates have continued into our modern era and are particularly felt in the state of Maryland. In 2018 Black people were 2.13 times more likely to be arrested for marijuana possession than white people. This is an alarming statistic when you consider that as of 2021, 18 states passed legalized recreational marijuana use by adults.

Waves of proposals to legalize recreational marijuana are being considered across the country. There is no better time than now to both legalize marijuana and reinvest in Maryland's Black and Brown communities targeted for police action and incarceration – a key racial justice issue. Lives and families were broken apart and destroyed by this injustice, and that destruction continues today.

During Maryland's 2022 legislative session, the discussion about marijuana legalization must center race equity and reinvestment in communities targeted in the "war on drugs." According to "A Tale of Two Countries," a 2020 ACLU research report, even though Black people only represent 60% of Baltimore City’s population, between 2018-2019, 96% of all marijuana possession charges were filed against Black people in the city.

Generally, people's possession of marijuana does not correlate to crime or criminal activity. Yet, the data clearly shows that law enforcement is overly reliant on marijuana as the biases of their public safety strategy. Between 2018-2019, Prince Georges County arrested 3,000 people for possession of marijuana over ten grams. That same year, Prince George’s County only had a 18% clearance rate of all violent crimes.

While it is true that Maryland decriminalized possession of fewer than ten grams of marijuana in 2014, Black people continue to be arrested more than white people. Black people are arrested at higher rates in nearly every county in Maryland even though Black and white people use marijuana at virtually the same rates. In fact, research shows that Black drivers are searched at disproportionately higher rates than white drivers in Maryland, even though the data shows that Black people are less likely to be found with illicit drugs and other contraband.

Decriminalization was never enough to overcome the dangers of this racist structure. Not only did the war on marijuana fail to stop drug use, but it was also a racist endeavor that consequentially led to the incarceration, life long criminal convictions, loss of jobs, housing, financial aid eligibility and immigration statuses of countless Black and Brown people. The historic prejudice Black people endure under these archaic laws must not be allowed to continue a moment longer.

During the 2022 legislative session the ACLU of Maryland will be supporting legislation to legalize adult recreational use of marijuana; prohibit the odor of marijuana alone from being used as probable cause to search a person or their vehicle; vacate previous marijuana-related convictions, mandate opportunities for reconsideration hearings for those currently serving time for marijuana-related convictions, and other low-level felonies and misdemeanors if those charges stem from a conviction based on a search due to the odor of marijuana. 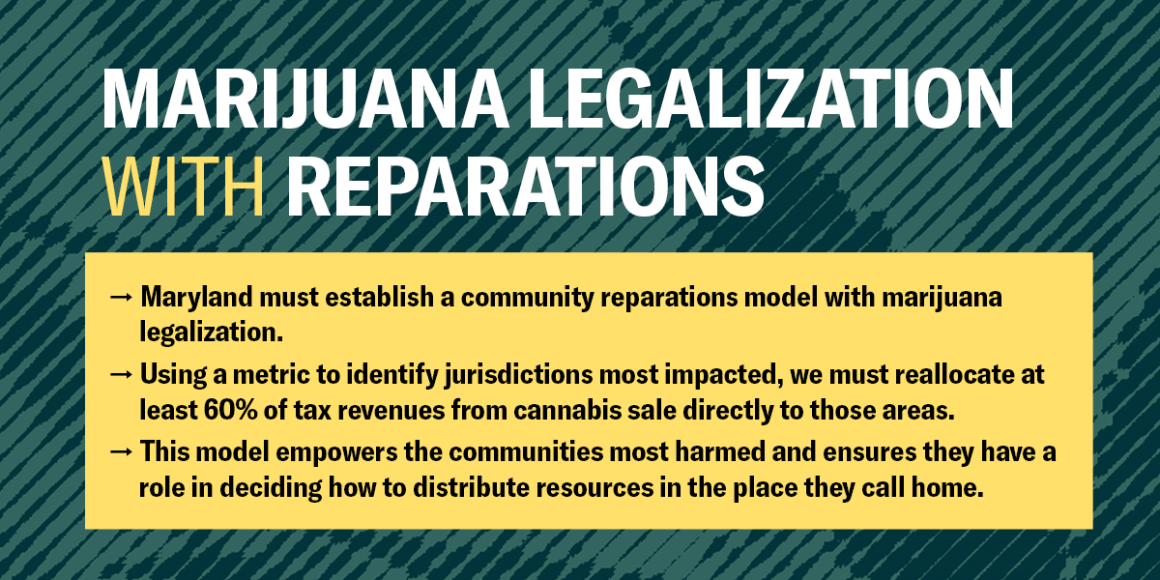 In addition, a community reparations model needs to be established. Using a metric to identify jurisdictions most impacted, we must reallocate at least 60% of tax revenues from cannabis sale directly to those areas. This model empowers the communities most harmed and ensures they have a role in deciding how to distribute resources in the place they call home.

It's time to be honest with ourselves about the history of the "war on marijuana" and how white supremacy was at the heart of, and further enabled by, this racist system. It did not stop the use or sale of marijuana, but it did exacerbate racial disparities in our legal justice system.

Until we put an end to white supremacy's exploitation of marijuana, its vicious cycle will continue disproportionately impacting Black and Brown people and communities, as it has for decades. The time is now: During the 2022 legislative session and beyond, as we finally legalize marijuana, we must take real steps to fix these racial inequities that have harmed communities for generations. Lives – and fairness – depend on it.
Related Issues