The U.S. Supreme Court will hear Dobbs v. Jackson Women’s Health Organization, a case in 2022 challenging Mississippi’s ban on abortion starting at 15 weeks of pregnancy. That state is asking the Supreme Court to reverse its landmark 1973 abortion decision, Roe v. Wade. This case could mean a major rollback on abortion rights. Roe is in jeopardy and our reproductive rights are under attack. 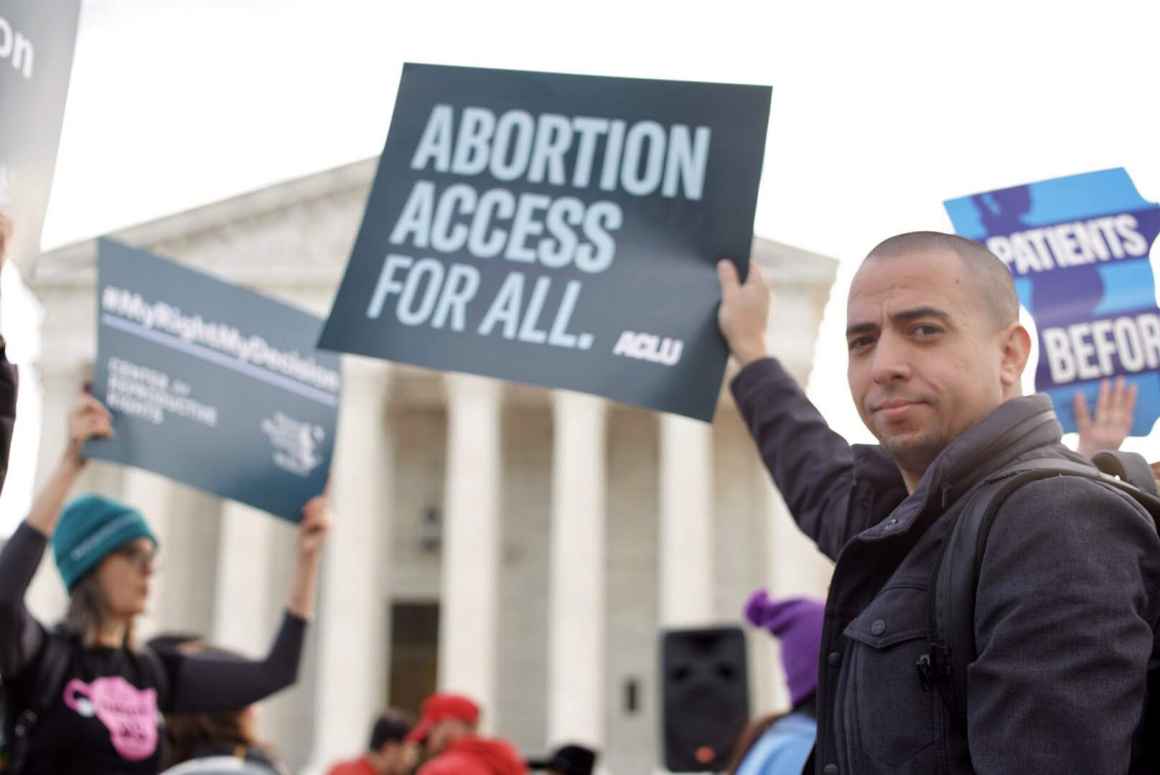 Access to abortion is life-affirming and life-saving. Roe is unlikely to be completely overturned, but there will still be those opposed to abortion who will continue to challenge it. And some of these challenges will make it to the Supreme Court – like the Mississippi case.

If SCOTUS upholds Mississippi’s abortion ban, states will be able to pass their own abortion laws rather than uphold Roe. Anti-abortion rights states have already started putting their bans in place, waiting for the green light from SCOTUS. A total of 19 states have enacted 94 restrictions on abortion since January, including 12 bans.

The ACLU won’t stop advocating and protecting the right to an abortion for people who can get pregnant. But as we watch the news unfold, I can’t help but feel fear and dread, especially knowing that there is a conservative majority in the Supreme Court. 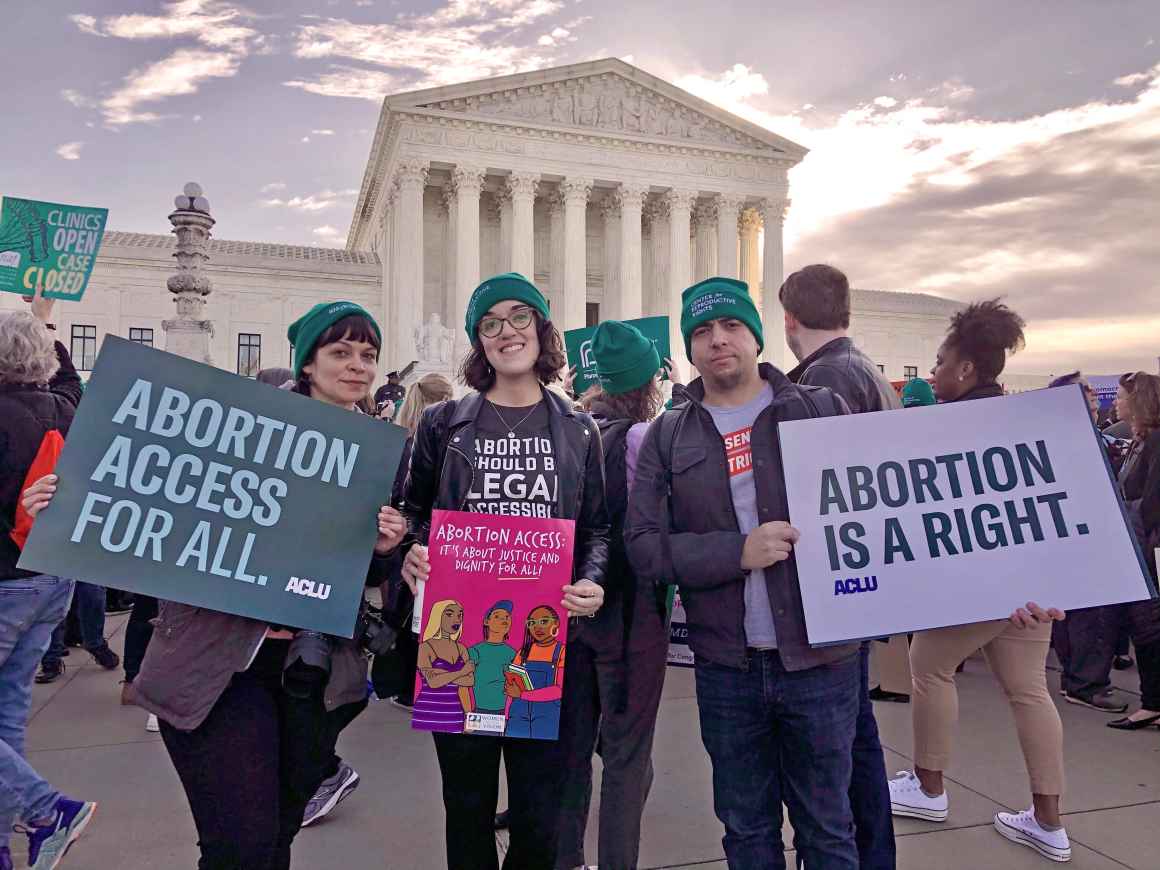 In the past, there have been attacks on abortion in Maryland, but legislators and activists in our state have worked hard to pass good abortion rights bills. In 1968, Maryland passed a restrictive ban on abortion. But in 1990, legislators tried to overturn this ban in order to protect people who can get pregnant in Maryland if Roe was ever overturned at a federal level. In 1990, that bill failed, but it was finally passed in 1991 after more abortion rights legislators were elected. The legislature passed the Freedom of Choice Act that asserted that the state could not interfere with a pregnant person’s right to decide whether or not to continue their pregnancy within the boundaries established in Roe v. Wade.

In Maryland, the Freedom of Choice Act of 1991 allows:

After anti-abortion activists gathered and forced the abortion issue as a referendum on the ballot – Question 6 in 1992 – abortion-rights activists won with more than 60% of Maryland voters in favor of enacting the law. Now, as other states like Alabama roll out more stringent abortion rules, we can expect this issue to come back to Maryland lawmakers.

In the Roe v. Wade decision, the majority of justices declared that people had a constitutional right to choose to have an abortion without excessive government restrictions. Maryland is one of those states in the nation that has the right to abortion protected. Maryland has work to do though. Guttmacher Institute, a reproductive health policy research group, recently released an analysis of the state abortion policy landscape in the United States and said Maryland “leaned supportive.” That is good, but could be better. 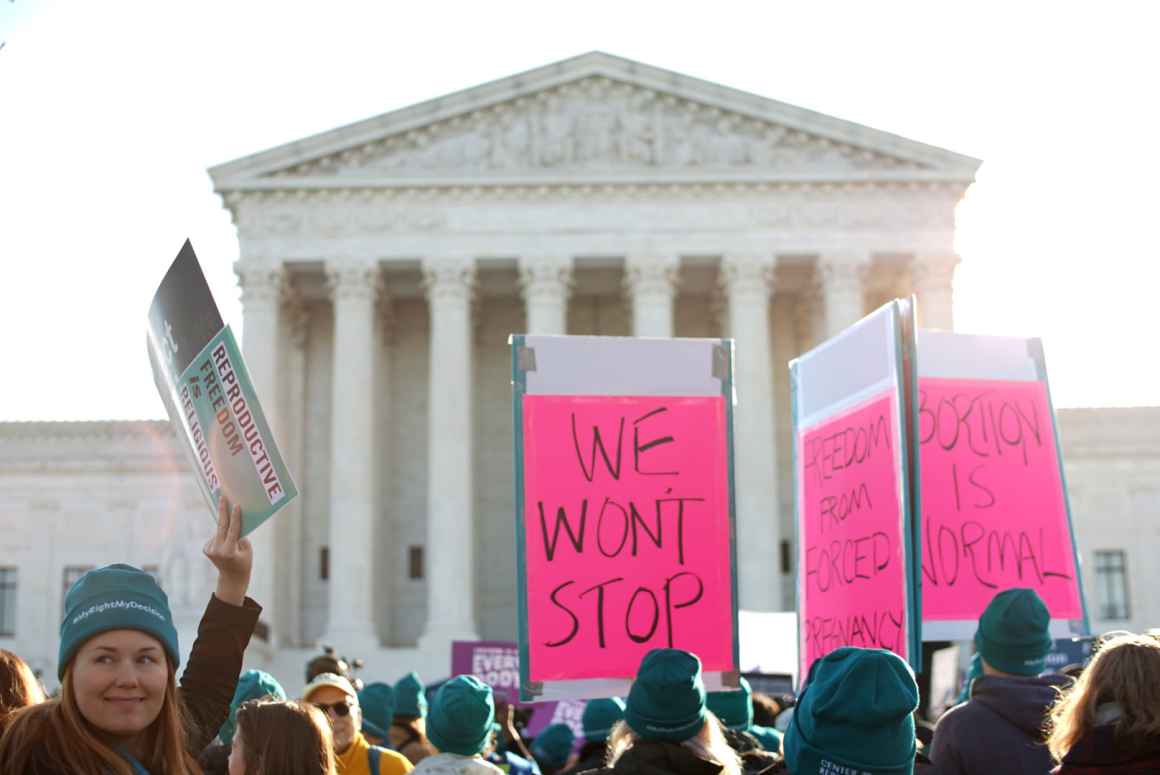 In 2017, 862,320 abortions were provided in clinical settings in the United States and 29,800 abortions were provided in Maryland. Since 1977, the Hyde Amendment has forbidden the use of federal funds for abortion.* We are only one of 16 states where state funds can be used to pay for abortions through Medicaid – in certain circumstances – and one of 12 states where the right to choose is explicitly protected.

And importantly, our state’s regulations on access to abortion aren’t as rigid as other states. Maryland regulations do not dictate small details designed to make abortion access nearly impossible, like how big hallway and closet sizes have to be in clinics, nor do they require doctors who provide abortions to have hospital admitting privileges. These are known as Targeted Regulations of Abortion Providers – or TRAP – laws. Maryland House Speaker Adrienne Jones said that she will likely push for even stronger abortion rights protections in the future.

Currently, the biggest obstacle to accessing abortion in Maryland is the cost.

Depending on how many weeks along a person is pregnant, an abortion can range from $300 to thousands. In Maryland, 60% of people seeking financial help with the cost of their abortion reported an average cost of $3,500. 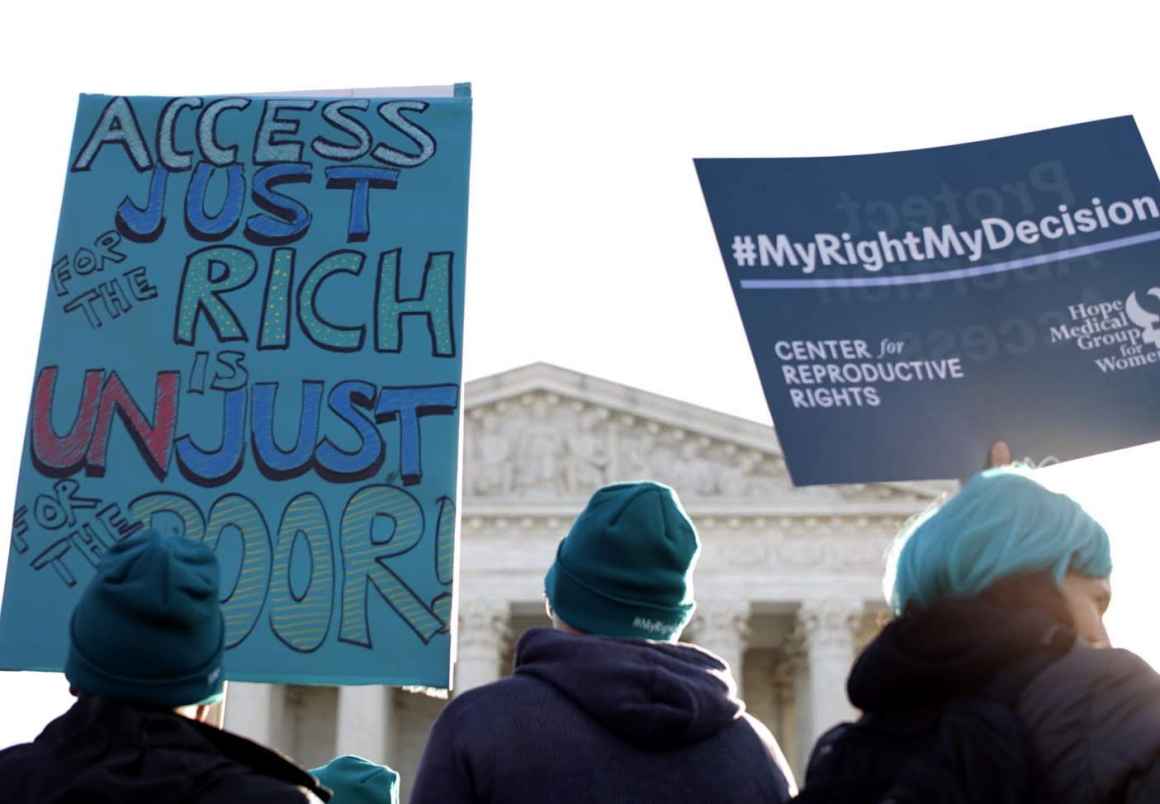 The Baltimore Abortion Fund (BAF) is a mutual aid, nonprofit organization, run almost entirely by volunteers. The organization provides financial assistance for abortions to people who live in or travel to Maryland for abortion care. BAF is part of the National Network of Abortion Funds, which consists of more than 70 independently operated funds across the country. Representatives from BAF said, “We want abortion to be recognized as essential health care, and we want everyone to have equitable access to abortion care.”

There are many obstacles preventing abortion care from being seen as essential as any other reproductive care. BAF said: “Even in states where abortion access is more protected, like Maryland, functionally the barriers such as funds, transportation, child care, arranging time off from work, lodging, etc. exist. Even if you have health insurance, not all health insurance will cover the full cost of an abortion procedure, and folks may not have the support needed to handle transportation, time off work, child care, lodging, etc.”

In an opinion piece last April, BAF highlighted that, “In a racist, xenophobic climate, these barriers are further heightened for black and indigenous people, immigrants, those who are undocumented and other marginalized folks.” 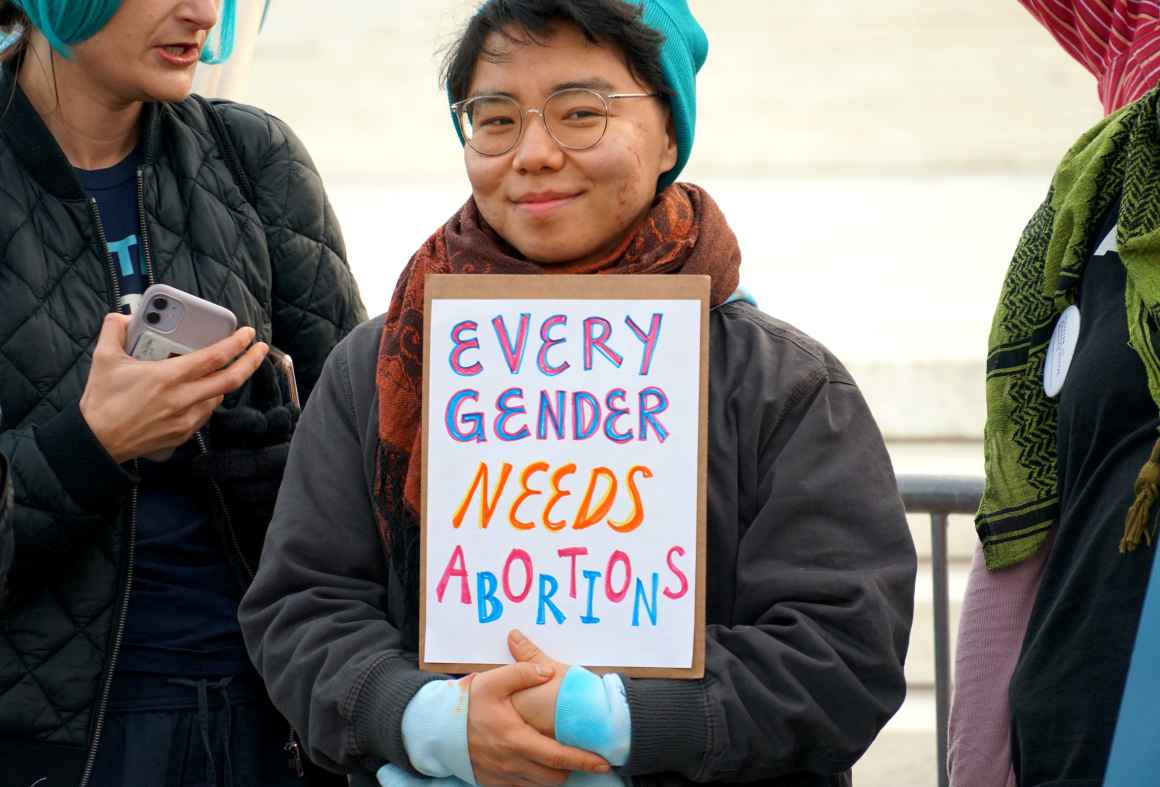 BAF reports that funding requests have skyrocketed during the COVID-19 pandemic: “At the current pace, the unmet funding need of our callers will total over $500,000 by the end of the year, nearly six times our current annual program budget.”

If the Roe v. Wade decision were overturned or even if some protections were rolled back, it would be devastating for our country. Not just for people who need abortions to save their lives, but also it is vital and constitutional to let a person decide whether or not they will carry a pregnancy to term, for any reason. Abortion is essential health care.

While attacks on abortion will continue, we at the ACLU of Maryland will be dedicated to supporting the rights of people who can get pregnant. We will work with our local partners to ensure that this right is not taken away and that abortion is accessible for all.

(Nicole McCann contributed to this piece.)

*The U.S. House of Representative just passed a spending bill without the Hyde Amendment for the first time since it was introduced in 1977. However, passing the Senate is unlikely.

ACLU of Maryland joins women's rights groups in support of the...

Not My Boss's Business: Rally at the Supreme Court