Have you heard the constant buzzing noise over our communities? That’s the sound of mass surveillance.

BALTIMORE – For the last three weeks, spy planes with high resolution cameras have been buzzing over Baltimore City, recording everyone below. We know from history that, in practice, the data collected from this technology will impact Black and Brown residents more than any others. That is why, in partnership with Black leaders, we sued the Baltimore Police Department last month to stop this society-changing, unconstitutional surveillance.

While we fight in court, this weekend the American Civil Liberties Union of Maryland (ACLU-MD) and national ACLU launched an ad campaign in support of community-based approaches to ending violence in Baltimore, rather than one based on unprecedented mass surveillance that intrudes on the privacy of everyone in the City. The campaign includes city-wide radio ads, featuring plaintiff Dayvon Love of Leaders of a Beautiful Struggle, print and digital ads in the Baltimore Afro-American Newspaper, and mobile digital billboard ads to spread the news about this invasive new technology circling over Baltimore during practically all daylight hours.

“In a majority Black city, the Baltimore City Police Department has once again found a way to target its residents and violate their rights,” said Dana Vickers Shelley, Executive Director of the ACLU of Maryland. “This invasive search into people’s constitutionally protected movements is an unprecedented attack on civil rights. This program never should have gotten off the ground, and we’re dedicated to ending it on behalf of the people of Baltimore.”

This futuristic spying technology should not be in the hands of any law enforcement agency—least of all the Baltimore Police Department. A 2016 Department of Justice report found that the BPD has for years engaged in gross violations of Baltimore residents’ constitutional rights. And more recently, the public learned about the rampant, internally unchecked criminal actions of the BPD’s Gun Trace Task Force. Despite this history, sustained, systemic reform of the BPD has not been implemented. Yet now, Baltimore City is being used as a test subject for the largest mass surveillance system ever put in place in America.

Even though he initially opposed the program, Commissioner Michael Harrison ultimately agreed to collaborate with Persistent Surveillance Systems to use planes to spy on Baltimore residents, stalking their every outdoor movement. Yet this technology, developed for military battlefields, turns all residents into suspects every time they leave their homes.

“With numerous killings and countless stories of police brutality and excessive use of force against Black people by officers with the BPD, it is bewildering that this department even entertains the notion that spy planes are an answer to end violence in Baltimore,” said David Rocah, Senior Staff Attorney for the ACLU of Maryland. “Instead of investing in Black communities and effective, grassroots-based solutions to attack the root causes of violence, the city is jeopardizing the trust of residents with a military-based tool that will be used to target Black people, who are already overpoliced.”

On April 9, 2020, Leaders of a Beautiful Struggle, Erricka Bridgeford, and Kevin James — with the support of the national ACLU and the ACLU of Maryland — brought a lawsuit against BPD to challenge the constitutionality of its mass aerial surveillance program, which puts virtually all Baltimore residents under constant surveillance. On April 24, a federal district court denied our request to temporarily halt the surveillance while the case proceeded. However, the case is far from over. The ACLU has appealed the district court’s refusal to immediately halt the program to the United States Court of Appeals for the Fourth Circuit, and briefing will be complete by June 5.

Read more on our lawsuit here.

Ads paid for by the American Civil Liberties Union, Incorporated. 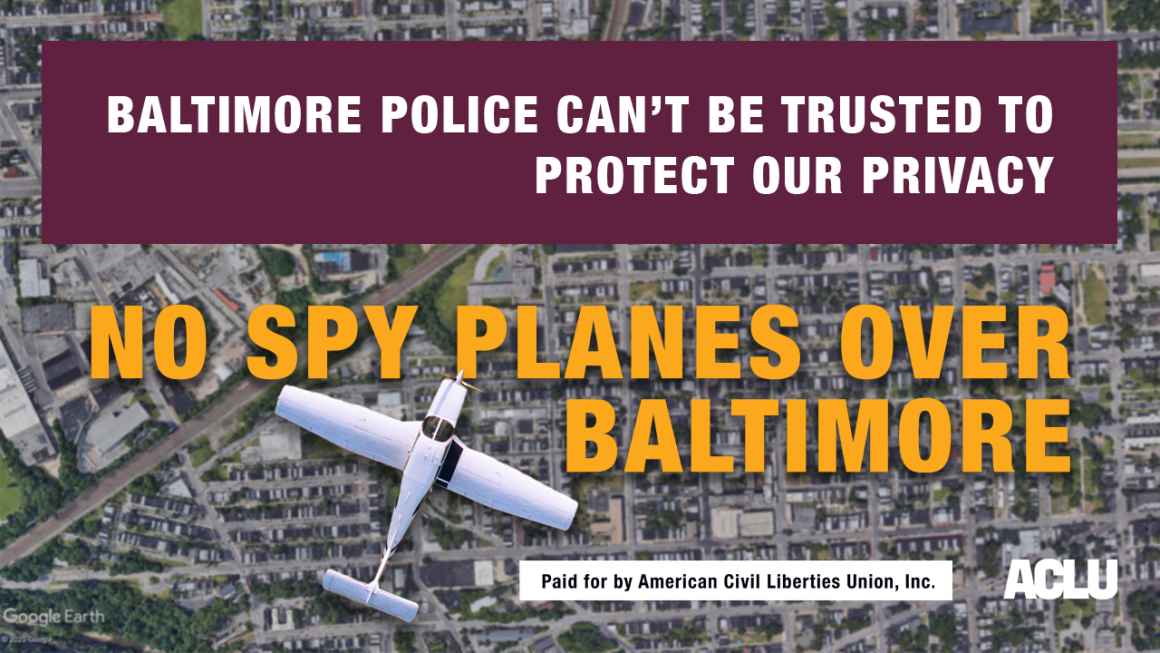