WASHINGTON, D.C. – Today, a Black family subjected to a humiliating and terrifying hour-long detention during a traffic stop by the Montgomery County Police Department (“MCPD”) took a stand against police misconduct by filing suit in federal district court in Greenbelt, Maryland, charging MCPD with a pattern of stopping Black and Brown motorists for minor traffic infractions and prolonging those stops to “fish” for evidence of some crime – any crime – without any individualized suspicion of wrongdoing.

On the pretext of an alleged “windshield obstruction,” police stopped the family as they were in the process of moving a grandmother into her new home.  The family gave the police no reason to suspect any wrongdoing.  Yet, despite having no just cause to do so, MCPD officers prolonged this stop for a minor traffic infraction into an hour-long ordeal involving half a dozen officers, a K-9 search of the car, handcuffs, and invasive physical searches, creating a humiliating public spectacle on a busy road.  The officers on the scene, including supervisors, escalated the situation even though they found no evidence of any crime, in clear violation of the family’s Fourth Amendment rights.

The officers’ conduct was captured on body cameras, which show a superior officer “training” a junior officer to use methods that she characterized as “ridiculous” to try to induce the driver to consent to the search of his car.  The body camera footage shows the supervising officer asking a third officer who had just arrived on the scene to “un-fuck up” the situation when she realized her efforts had failed to find any contraband.  The videos show officers scheming to come up with some after–the–fact reason to justify searches of the car.  When they finally did search the car, they found nothing.  Excerpts from the videos from the officers’ body worn-camera are available here. 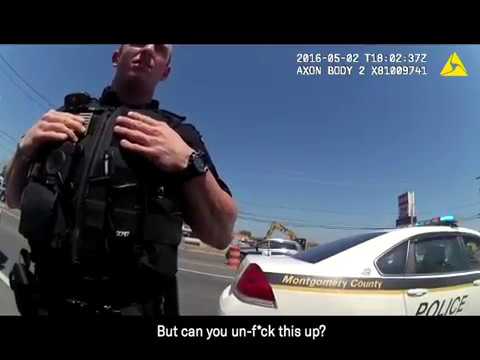 “This was a humiliating and terrifying experience.  I was made to feel like a second-class citizen,” said Ms. Faulk-Foster.  “I have lost all trust in the Montgomery County Police Department.  I made a complaint about this to the MCPD but they did not take it seriously.  It saddens me that it had get to this point.  I want justice to be served and for MCPD to change its practices so that this doesn’t happen to anyone else.”

“Racial bias infects far too much of our criminal legal system. This is a shocking but far too common example of abuse of police authority,” said Emily Gunston, Deputy Legal Director at the Washington Lawyers’ Committee.  “We hope that this lawsuit will lead to meaningful change in Montgomery County Police Department’s policies and practices.”

“It is time for police to stop viewing these kinds of baseless and humiliating searches of Black and Brown drivers as routine and costless,” said ACLU of Maryland Senior Staff Attorney Sonia Kumar.  “As the experiences of our clients show, stops and searches of this sort send people of color the devastating message that they are second-class citizens, irrevocably undermining trust in police.”

If you have information about similar conduct by Montgomery County Police Department officers, please contact the Washington Lawyers’ Committee at montctypolice@washlaw.org

The complaint is available here.

Founded in 1968, The Washington Lawyers’ Committee for Civil Rights and Urban Affairs works to create legal, economic and social equity through litigation, client and public education and public policy advocacy. While we fight discrimination against all people, we recognize the central role that current and historic race discrimination plays in sustaining inequity and recognize the critical importance of identifying, exposing, combating and dismantling the systems that sustain racial oppression. For more information, please visit www.washlaw.org or call 202.319.1000. Follow us on Twitter at @WashLaw4CR.

The ACLU of Maryland works to ensure that all people in the state of Maryland are free to think and speak as they choose and can lead their lives free from discrimination and unwarranted government intrusion. The organization is guided in its work by the United States Bill of Rights and the Maryland Declaration of Rights. The Maryland ACLU acts without partisanship to achieve these goals.

One Year After the Police Killed Emanuel Oates: What Still Needs to...