In December 2016, Baltimore City Public Schools (City Schools) announced a $130 million structural deficit for the 2017-18 school year. CEO Dr. Santelises reported that approximately 1,000 teachers and school staff would have to be laid off to balance the budget. A significant part of the funding shortfall came from the loss of $42 million in state aid, due to dropping enrollment and increased City wealth. We crunched the numbers, and discovered the cause of the structural deficit – flat state funding to City Schools overthe past nine years. When the state changed the education funding formula in 2007-08 by removing future funding increases (an inflation factor), City Schools was left with rising costs, like utilities and health care, with no increase in the funding stream to cover them. 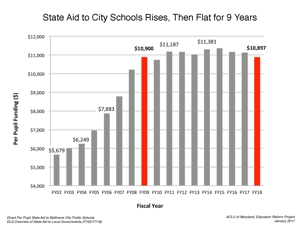 To prevent disastrous cuts to schools citywide, the Baltimore Education Coalition (BEC), co-chaired by the ACLU, launched the campaign to #FixTheGap in January to advocate for additional funding for City Schools. In February, BEC worked with school communities to fill 40 buses and rallied over 2,000 people at the State House in Annapolis to urge the Mayor and Governor to work collaboratively to fix City Schools' $130 million structural budget gap. BEC also asked for a multi-year fix to ensure that City Schools could keep school level budgets largely intact until an improved education funding formula is adopted by the state legislature. Delegate McIntosh and Mayor Pugh responded by proposing a $180 million "Bridge to Kirwan" funding package which provides both additional revenue and spending relief for City Schools over the next three years. 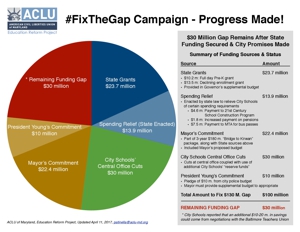 The Time is Now to Center Race & Wealth Equity in Maryland...

Criminalizing Poverty: Why We Need to Stop Punishing Students from...