BALTIMORE, MD — In the face of attacks from the Trump Administration, racial discrimination by the police and U.S. Immigration and Customs Enforcement (ICE), and racist immigration policies and enforcement, the Latinx community continues to be strong and resilient. In this month’s episode of the Thinking Freely podcast, Jazmin DiCola from the RISE Coalition of Western Maryland and Nick Taichi Steiner, a staff attorney at the American Civil Liberties Union (ACLU) of Maryland, joined Amber Taylor, host and producer of Thinking Freely, for a virtual conversation to celebrate Latinx identities, during this Latinx Heritage month, and to discuss racial justice issues that impact Latinx people.

Here in Maryland, we have seen especially clear examples of racial profiling in Frederick County, the county where the RISE Coalition has focused its work. From Sara Medrano, a woman who was pretextually stopped by Frederick Sheriff’s deputies for a broken tail light that turned out to be working just fine, to Roxana Santos who was unjustly arrested for “suspiciously” eating her sandwich, these kinds of interactions leave Latinx communities feeling anxious and fearful about the police and ICE.

Jazmin DiCola said: “They see police cars often where they work and they’re watching them. They’re doing racial profiling. They feel like if I leave work and the police is there, ‘I’m afraid I’m not going to make it home. I’m afraid they’re just going to stop and take me.’ Because they connect the police with immigration.”

A report released by the Bureau of Justice Statistics showed that the police were most likely to stop Black people in traffic and on the streets.1 During police-initiated interactions, the police were twice as likely to threaten or use force against Black and Latinx people than white people.2 ICE also engages in a pattern of racial discrimination. Around 98 percent of those deported were from Latin and African countries in both 2012 and 2013.3

It is not always easy to organize and challenge systemic racism in the face of racist programs like 287(g), which merge local police and ICE together and encourage racial profiling. However, RISE has done just that in the Medrano vs. Jenkins lawsuit, filed with the support of the ACLU of Maryland. Black and Latinx immigrants have also been to court to challenge the Trump administration’s failure to provide fair hearings to people in immigration detention.

Along with the racial discrimination from police and ICE, the Latinx community has also had to feel the economic and physical impact of COVID-19. In Maryland, Latinx people have the highest rate of contracting the virus and Black people have the highest rate of deaths due to COVID-19.4 And because mass incarceration and ICE detention disproportionately affect Black and Latinx people, this worsens their chances of surviving this pandemic. 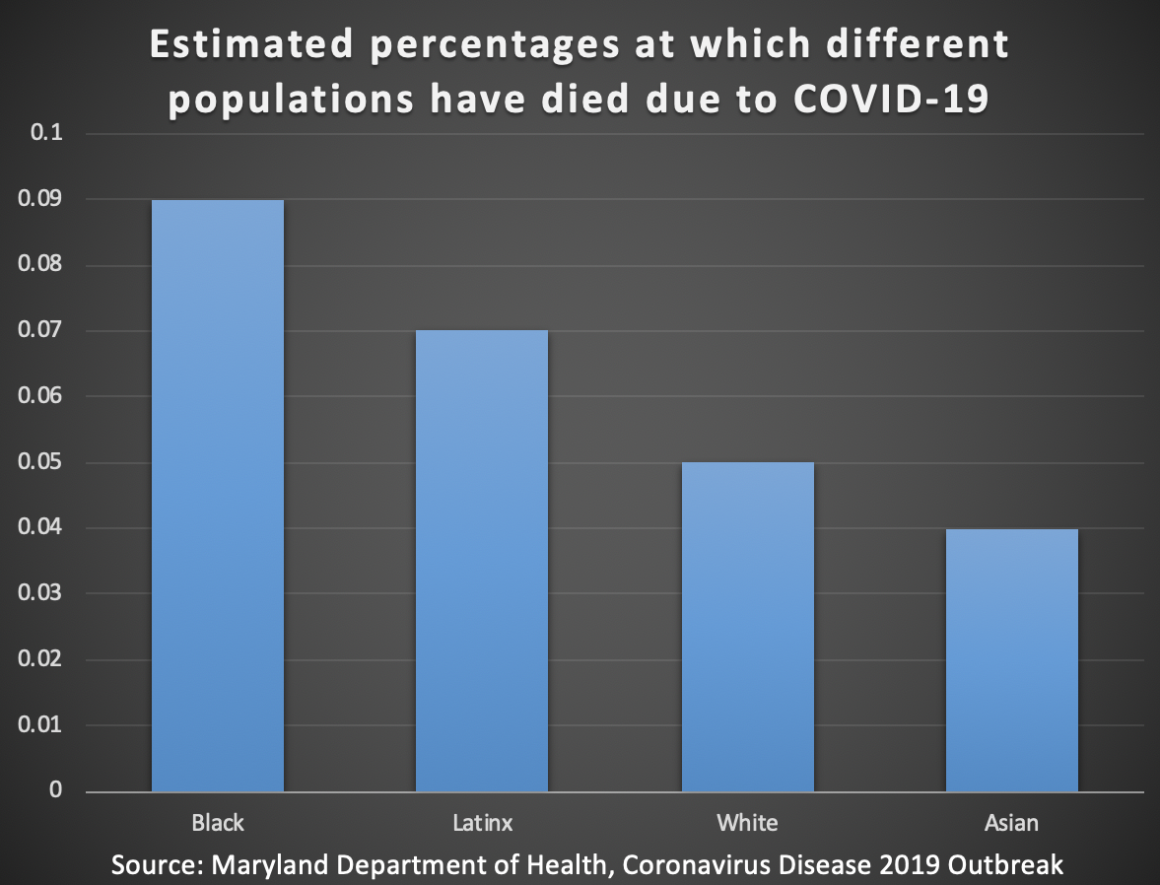 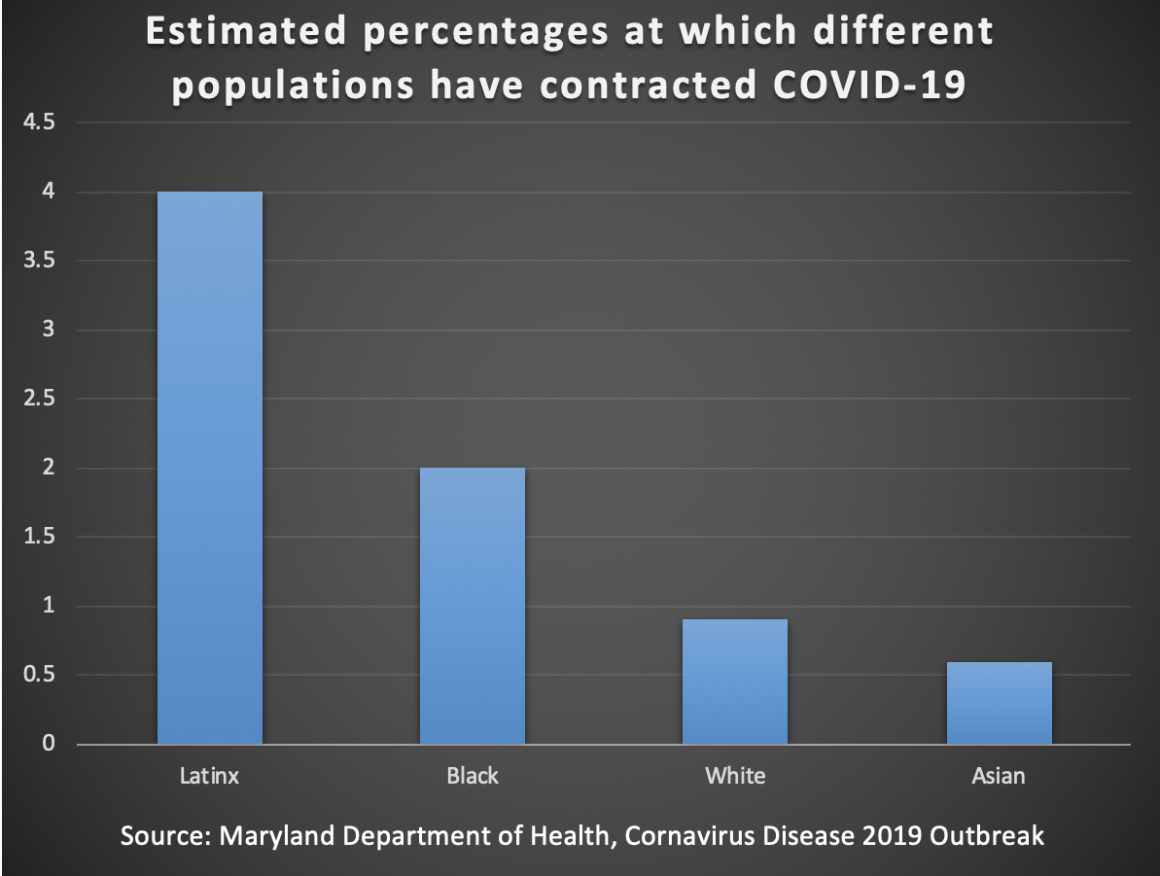 Nick Taichi Steiner said: “Courts across the country have been ordering people released from immigration detention. There are alternatives to detention. People can still remain with their families without having to go through this awful, traumatic process of being held in a cage, taken away from their family. It’s just unnecessary. The pandemic is showing how unnecessary it is.”

Despite these challenges, the Latinx community still finds ways to advocate and exercise their constitutional rights to make their community safer. As we celebrate Latinx Heritage Month, we must continue to uplift the humanity of Latinx people. That includes protecting Afro, Indigenous, and Latinx of color from victimization and criminalization, because too often they are profiled because of the color of their skin, persecuted as an “other” for merely existing, and denied rights, respect, and dignity that every human being deserves.

Jazmin DiCola said: “I’m very proud to be Latina. We’re willing to be there and raise our voice. We want a community where we can actually embrace our cultures, embrace everyone’s differences. I’m very proud that we are that community. The Latino community is not just one color, not just one ethnicity. No, we’re different. We all have different cultures. But we all become one and we understand that. So, I’m very proud of that and I know that the community is looking for that change. It’s moving forward. And even if they’re afraid, that doesn’t stop them.”

Thinking Freely promises to always bring their listeners local activists and ACLU of Maryland staff members to inform you about the latest news and what you can do about it. On this podcast, Jazmin and Nick reimagine what the future could hold for Latinx people, aspiring to the idea of no immigrants in cages to hoping for more engagement from political leaders with their non-English speaking communities. Join us in striving for a better future for Latinx people in Maryland. Listen here.

1 The Bureau of Justice Statistics. (2018, October). Contacts Between Police and the Public, 2015. Retrieved from https://www.bjs.gov/content/pub/pdf/cpp15.pdf.

Still Rising: How the Latinx Community is Exercising Their Power in...

End the IGSA contract with ICE in Howard County

The Digital and Racial Divide Keeps Widening as the Pandemic Continues